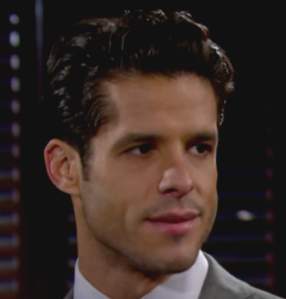 The situation at Newman Enterprises has never been more complex, as Adam and Luca continue moving forward with their alliance against their fathers. On Wednesday, Adam assured Victor that their plot to take down Luca and the Santoris was going as planned. Meanwhile, Luca appointed Marisa (Sofia Pernas) — who’s been getting closer to Noah (Robert Adamson) once again — as an informant to dethrone his father. While the ultimate alliance is still unknown, one thing is for certain: Adam and Luca don’t trust each other.

In Friday’s episode, Luca wants a favor from Adam, who questions him on it.

“What do you need my help with?”

Luca says it has to do with Marco (Peter Bergman).

Whether or not Adam can trust Luca remains to be seen. 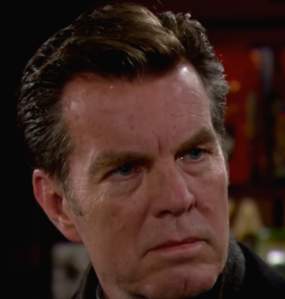 Meanwhile, Victor continues prying for more info on Kevin’s webusiness venture. On Wednesday, Victor approached Kevin about the cyber project, wanting to see a business plan. After Victor left, Mariah (Camryn Grimes) tried convincing Kevin that Victor was too powerful to pass up. Kevin insisted it wouldn’t be the right thing by Billy, as Mariah — who celebrated her birthday — said it would simply be business. However, Victor must deal with Jack, who wants to put up the money for Billy to be the investor.

On Friday, Victor and Jack bicker over Kevin’s business venture. Jack gets angry after hearing about Victor’s intention to take Billy’s place as an investor. Victor won’t take responsibility for Billy’s potential loss, as he blames Billy for his own shortcomings.

“Who’s responsible for Billy’s hopes and dreams being dashed?”