After the inaccurate reports that Big Ang had passed away on the night of February 17, her reps confirmed that the Mob Wives star did die at around 3 a.m. on February 18.

This is @vinniemedugno on behalf of the family of Angela Raiola, please see below: pic.twitter.com/wiuPApr9Lw

The original story on the misreporting about her death is below:

Thankfully, Mob Wives star Big Ang is still with us and fighting her State 4 throat cancer diagnosis. The confirmation that she’s still alive came in a Twitter post from her account. The post described the reports as “TOTALLY INACCURATE.” The statement adds that she is still in a New York hospital surrounded by loved ones.

The original report from Entertainment Tonight.

The report that she had died was first published by Entertainment Tonight. Their story was later updated with the disclaimer:

Though a source close to the family confirmed Angela Raiola’s death to ET on Wednesday night, Mob Wives creator and Raiola’s sister Jenn Graziano now says, “At this time that is a false rumor. I am here with the entire family and all her friends and they ask for your continued support and prayers. We will keep everyone updated.”

In an appearance on Dr. Oz’s show on February 16, Ang said that doctor’s had given her a 30 percent chance of survival.

During her cancer fight, a Go Fund Me page had raised $45,000 to help Raiola’s family pay for her treatments. Her uncle was Salvatore “Sally Dogs” Lombardi, a former captain in the Genovese crime family. 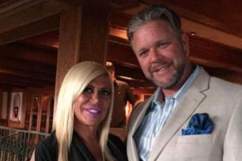