On tonight’s episode of Teen Mom, Amber Portwood’s ex Gary Shirley approaches her with information, claiming that Portwood’s fiance Matt Baier has 7 kids she doesn’t know about. Portwood exclaims that she knows her man, but worries there could be truth to this news. As far as Portwood knows, Baier has two children, but Shirley shows her documents with five others. Shirley insists that his exes are hitting him up for child support and Portwood insists she’s talked to Baier’s exes and that’s not the case. Watch the jaw-dropping clip above.

Here’s what we know …

Last year, multiple sources emailed us with similar information. One of the sources stated:

Matt Baier owes 9 years of child support. He skipped town on his kid and went into hiding so he wouldn’t have to pay. Apparently, he’s done this more than once and may have more children out there.

Granted, there’s always two sides to the story. But, Baier’s baby mama Kelli Nunn told The Ashleys Reality Roundup that there are actually at least eight children. She also talked about how she met Baier and how his proposal to Amber Portwood was very similar to the one he gave her. Nunn reveals:

The speech he gave before proposing to Amber was almost verbatim to what he told me when he asked me to marry him … We worked in the warehouse together; he came to my house, brought me my favorite flowers, and we started dating. Within a month he had moved in. I found out I was pregnant in September and by October, Matt was GONE! I never heard from him.

Nunn continued, saying that when Baier finally met their daughter he introduced himself as the sperm donor. Nunn states:

Up until she was two I kind of thought we would still work things out. He gets into your head, he’s a good conman, I thought he was the one for me, that we belonged together. He has this way of making you think that everyone else is crazy, and that you belong with him.

And, as for the advice Nunn has for Portwood about Baier, she says:

My advice to Amber would be to RUN! Don’t get pregnant, that’s the big thing. She doesn’t even know the half of it. When you’re with him, you don’t see the red flags. It wasn’t until afterward that I saw everything and I couldn’t believe that I hadn’t seen it before. He just crushes people. He even told me that he was going to break my heart when we were dating, but I thought he was just being dramatic.

Portwood has defended the allegations against her man via Twitter, writing:

You would have to be ignorant to believe that honestly..he’s a great catch thanks … For anyone talking crap about this whole situation with Matt..this s–t isn’t funny This is real life I have to deal with not entertainment. I’m not dealing with this negative immature bulls–t. I have enough to worry about. I’ll block and be done with it. Love not hate learn it! … I don’t care if I found out he had 10 kids. He has to deal with that and his past and I’ll stand by him. But I’m a woman and I hold my own.

The Ashleys Round Up reports that on January 21, 2016, Baier received a summons to appear in court in order to answer for the original seven child support cases. Baier is also scheduled to appear in an Indiana courtroom on March 22, 2016 for a hearing to modify his support orders. 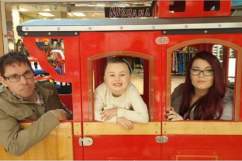