The Bold and the Beautiful returns on Tuesday with an all-new episode as Sasha (Felisha Cooper) turns up the sexual heat on the object of her desire, Zende (Rome Flynn). Also, Brooke (Katherine Kelly Lang) expresses her regret to Eric (John McCook) for telling Bill (Don Diamont) that she’ll always love him.

Sasha Makes Her Move on Zende 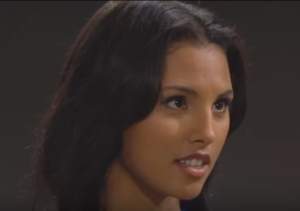 Sasha — pictured above in Tuesday’s B&B episode — is ready to turn up the sexual heat on Zende. (CBS Screenshot)

Sasha is adamant about staying in LA despite her biological father, Julius (Obba Babatundé) preferring her to go back to Illinois. Lately, she’s been down on her luck due to her former bestie, Nicole (Reign Edwards) costing her a Forrester Creations modeling gig. Sasha filled in and hit it off with Zende when Nicole came down with pregnancy-related morning sickness. Since Nicole is Rick (Jacob Young) and Maya’s (Karla Mosley) surrogate, Rick went ahead and rescinded the company’s offer to Sasha. In response, Sasha informed Zende of his girlfriend’s backstabbing ways. Later on, she even confronted Nicole, who seemed remorseful.

On Tuesday, Sasha — clearly in no hurry to leave LA — tells Julius that Zende can do better than his other daughter.

“He’s fine. Way too fine for that nerdy Nicole even on her best day.”

Later on, Sasha gets up close and personal with Zende, indirectly insinuating that she could care less whether she crosses the line with him.

“I don’t owe her anything.”

Will Zende respond to Sasha’s sexual advances, or will he remain loyal to Nicole, despite her jealous ways? 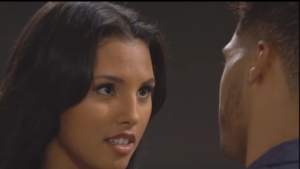 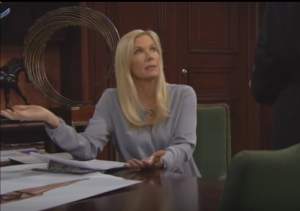 Brooke — pictured above in Tuesday’s B&B episode — has regrets over professing her love to Bill. (CBS Screenshot)

Katie (Heather Tom) was finally at a point where she forgave Brooke for her past mistakes. However, Katie’s trust for Brooke was instantly broken when she caught her — while eavesdropping just outside Bill’s office — telling Bill that she’ll always love him. After hearing these words, Katie — who has heart issues — had a meltdown inside her office. Brooke — not knowing the reason for Katie being on the floor — suggested she go to the hospital. In response, Katie changed the subject and angrily confronted Brooke on what she saw. Brooke unsuccessfully attempted to do damage control, saying that she had no intention of pursuing Bill. Later in the week, Katie made it clear that she didn’t want Brooke anywhere near her family, husband, or herself.

On Tuesday, Brooke expresses her regret about the situation to Eric. A few days removed from the encounter with Bill, she now realizes that telling Bill she loved him was pointless.

“What possessed me to think it was okay to tell Bill that I love him? What good could’ve come of that?”

Meanwhile, Katie isn’t budging when it comes to forgiving her sister. On Tuesday, she vents to Bill — who she wrongfully thinks is innocent in the situation — about being disappointed in Brooke.

Is the relationship between Brooke and Katie broken beyond repair, or will Katie find it in her heart to forgive her sister again? Stay tuned.