The Young and the Restless returns on Thursday with an all-new episode as Nick (Joshua Morrow), Sage (Kelly Sullivan) and Dylan (Steve Burton) try to figure out Patty’s (Stacy Haiduk) motive for killing Dr. Anderson (Elizabeth Bogush). However, Paul (Doug Davidson) won’t be a fan of them thinking that it went beyond his sister having a mental breakdown.

Read on for Y&R’s Thursday, February 11, 2016 spoilers and be sure to check back for after-show recaps. 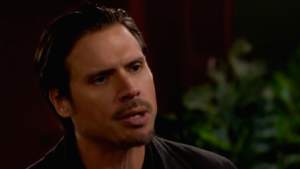 Nick — pictured above in Thursday’s Y&R episode — teams up with Sage and Dylan to uncover Patty’s motive for killing Dr. Anderson. (CBS Screenshot)

Nick and Sage were in the thick of it; trying to uncover Dr. Anderson’s reason for repeatedly prying into their lives. For weeks, Dr. A tried forming a wedge between the husband and wife. Initially, Sage was steering clear of Nick because of her inability to get past the lose of baby Christian, who’s really baby Sully. After being admitted to Fairview, Sage found a book in Dr. A’s office called Living With Paralysis, which tied into the Newman Ranch diving incident. However, just when Nick and Sage were moving forward with their plan of exposing Dr. A, she was abruptly killed by Patty.

On Thursday, Patty’s still checked out of reality but Dylan’s determined to question her again when she calms down, according to Celeb Dirty Laundry.

Paul won’t be okay with this plan as he thinks that his sister only had a mental breakdown. Despite this, Dylan continues plugging away at finding info. Sitting by Patty’s hospital bed, she flips out when he tries addressing her crime.

Paul barges in the hospital room and doesn’t like what he sees.

Meanwhile, Sage thinks that Patty found out who Dr. Anderson really was and killed her in self-defense.

While Dylan and Nick focus as a cohesive unit on Thursday, their camaraderie will likely be short-lived as the two go further down the rabbit hole. Hence, Patty’s fully aware of baby Sully’s true identity and chance are it won’t be pretty when Dylan finds out.

Like Sage and Dylan, Nick feels as though there’s more to the crime than meets the eye. The three of them investigate Dr. A’s murder as a unit.