The Young and the Restless returns on Wednesday with an all-new episode as Luca’s (Miles Gaston Villanueva) life may be on the line amid his intentions to take down Victor (Eric Braeden) and his own father.

Could Chelsea Help Save Luca From Adam & Victor? 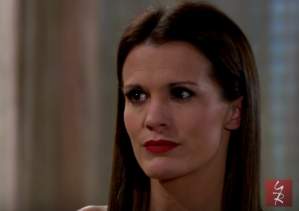 Chelsea — pictured in Wednesday’s Y&R episode — may be Luca’s only hope at saving his life. (CBS Screenshot)

Unbeknownst to Luca, Adam’s (Justin Hartley) been working with Victor as a double agent. While Luca continues to increasingly trust Adam, the latter continues staying loyal to his father. Meanwhile, Marisa warned Luca to not trust Adam because he could betray him. Marisa’s (Sofia Pernas) inklings now look as though they’ll come to fruition. Luca now finds himself in a compromising position after giving Adam the info on Marco’s (Peter Bergman) shady business dealings.

Concerned for Adam, Chelsea’s (Melissa Egan Claire) been prying into Adam’s business dealings, which may now have huge ramifications. Chelsea’s now privy to Adam and Victor’s plan on taking down the Santoris.

On Wednesday, Adam’s ready to execute the plan to bring down Luca and his family. Adam informs Luca that the latter’s father will know that it was his own son that got him imprisoned.

Marisa — vying for Luca’s safety, and her own — requests that Chelsea help stop things before Luca’s in serious trouble. The two have gotten closer since Marisa took the job at Chelsea 2.0. Nonetheless, Victor won’t be too thrilled to hear that Chelsea’s continuing to get involved in his business dealings.

“I need to know where Adam is springing the trap on Luca. I need to stop this.”

Adam is fully aware that this is his best chance at ridding Newman Enterprise of the Santoris. However, “this is life or death, quite literally” for Luca, according to Celeb Dirty Laundry.

The only way Luca could be safe is if he himself has been playing along with Adam and staying loyal to his own father.

Will Luca face deadly consequences from the Santori family, or has he been duping Adam all along? Stay tuned.