The Bold and the Beautiful returned Tuesday with an all-new episode as Sasha (Felisha Cooper) informs Julius (Obba Babatundé) about her motives with Zende (Rome Flynn) while Katie (Heather Tom) vents to Bill (Don Diamont) about her disappointment in Brooke’s (Katherine Kelly Lang) betrayal.

Read on for B&B’s Tuesday, February 2, 2016 recap and scroll down to click “Next Page” to see what could lie further ahead.

Katie Vents to Bill About Her Disappointment in Katie

Meanwhile, Nicole (Reign Edwards) says she know she disappointed Zende, but “the struggle with hormones is real” and Sasha is beautiful. She apologizes to him.

Julius tells Sasha that Nicole cares about her.Sasha says she’s only there because Nicole made it right. Sasha says she belongs with her family. Julius says, “just not here.”

Zende says Nicole doesn’t need his forgiveness, he says he just saw how bad it effected her relationship with Sasha. Zende asks her why she smells so good. They kiss.

Sasha yells at Julius, saying he had an affair with his mother and she’s the result. He insists she go back to Illinois. Sasha says that if she’s going to be a Forrester model, then “why in the world” would she go home.

Bill tells Katie that nothing happened with Brooke, so she needs to move on and let it go. Katie says she can’t because Brooke betrayed her.

Sasha Gets Up Close & Personal With Zende During a Photo Shoot 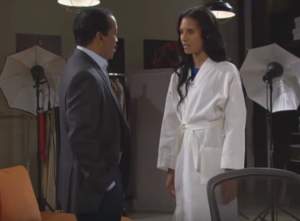 Pictured above from left to right, Julius and Sasha, as Sasha rubs her intentions on sabotaging Nicole and Zende’s relationship in his father’s face. (CBS Screenshot)

Zende wants to sleep with Nicole, but she insists they can’t until she has the baby. He says that he doesn’t know if he can hold out that long. They kiss up against the desk.

Julius demands that Sasha continue to keep “this secret” and not disrupt the Avant family, and that includes Nicole and Zende.

Brooke says that Rick “is so happy.” Rick says enough about him, he wants to know what happened between her and Katie. Meanwhile, Katie says he missed Brooke, but Bill’s the love of her life. Bill says they’re just words. Katie disagrees, saying Brooke’s fixated on him. Bill says no lines were crossed and Brooke didn’t anticipate the fallout. Katie’s wondering why Bill would defending her.

Sasha tells Julius that she’s not very obedient, maybe it’s because she’s got daddy issues. She tells Julius that Zende ” is fine,” way better than nerdy Nicole. Sasha says, “it’s been real, but Zende is waiting for me.” She leaves for their photo shoot.

Zende and Nicole continue kissing in the office. Maya tries opening the door, but it’s locked. She informs Zende that it’s time for the photo shoot.

Later, Zende snaps pictures of Sasha. She says she’s ready for her closeup. Sasha moves close to Zende, who reinforces with Sasha that he’s with Nicole. Sasha says she doesn’t owe Nicole anything.

Brooke tells Eric that she was stupid for telling Bill she loves him. Eric thinks Brooke will forgive her again. Brooke says she can’t deny that she loves Bill though.

Katie says that Brooke was lying to her face; her feelings for him were there all along. Katie says Brooke just wanted Bill back in her bed. Bill says “not a chance,” and wants Katie to come down. Katie — in tears — thanks Bill for being there for her. Katie says she knows Bill’s heart is with her. They kiss. Katie says she’s his, and he’s hers. Bill says he’d never doubt it.