Brittany Fogarty, age 25, joined the cast of Mob Wives in its final season and we got a chance to chat with the blonde, fiery bombshell. Fogarty has had no reservations about being very involved in the goings-on with her fellow cast members and she has definitely made a name for herself. She refers to herself as “uncontrollable” and is not afraid to speak her mind. Check out our 5 Fast Facts on Fogarty after our sit-down with her below.

1. Her Father Did Time With Karen Gravano’s Dad Sammy The Bull

My father ratted 2 save his kids. Karens father ratted to save himself, knowing his family wld be in danger if he flipped & did it anyway

Though Fogarty and Gravano were not good friends prior to getting together on the show, they shared a respect for each other since their fathers spent time together behind bars. Fogarty’s dad was even in Sammy The Bull’s circle. Unfortunately, Karen Gravano and Brittany Fogarty ended up butting heads as Fogarty ended up seeing Gravano as a “controller.” Tensions were high, especially when Fogarty didn’t get along with Gravano’s friend Marisa Fiore. 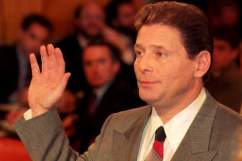 When Brittany Fogarty was just 2 years old, her parents Andrea Giovino and John Fogarty were arrested and each sentenced to prison. Fortunately for Brittany, her parents convinced the court to let her father do all the time so that her mother could be home to raise their family. John Fogarty admitted to multiple counts of murder and later entered the Witness Protection Program. Her mother, on the other hand, ended up writing a book called “Divorced from the Mob: My Journey from Organized Crime to Independent Woman.” Giovino’s brother John Silvestri was also wanted for extortion and murder, according to The Guardian. After being given a break by the feds, Giovino relocated her family to Pennsylvania.

3. Brittany Fogarty Is a Model

Brittany Fogarty may be eager to defend herself and a bit aggressive, but this tough girl is also a talented model. In addition to print work, she has walked the runways for a couple major designers such as Michael Costello. Other designers she’s modeled for include Donna Mizani and Gregorio Sanchez.

4. When Angela “Big Ang” Raiola Died, She Was Deeply Saddened

You will be forever missed and never forgotten. Thank you for always being there for me, I will forever cherish all of the memories and laughs we have shared together and all that you have taught me. Love you ? #RIP #Angela @biggangvh1

Just like the rest of the cast, Fogarty was affected by the death of Angela Raiola, aka Big Ang. In an interview with Wet Paint, Fogarty said that she and Big Ang hit it off when she joined the show. Fogarty explained:

I think it was easy for us to connect because we had things to talk about as far as my aunts, and she grew up with them, and she knew them. She has that fun, loving personality, way about her, and I’m very similar.

Big Ang showed her struggle with cancer while filming the last season of Mob Wives, but by the end of the season, she was cancer free. Not long after, the cancer returned at stage four and she lost the battle within a couple months. She was a larger than life woman with a huge heart as well as personality.

This season on Mob Wives, Drita D’Avanzo seemed to be a little bit of an outcast with her longtime friends, aside from her late BFF Big Ang. When D’Avanzo befriended Fogarty, some of the other women felt that D’Avanzo was manipulating Fogarty and swaying her opinions. Neither Fogarty nor D’Avanzo felt this way as the two shared similar personalities and approaches to volatile situations.

They can hate on me all they want, I'm not jumping in the bandwagon of hating @DritaDavanzo for no reason #MobWives

On her social media accounts, Fogarty has made it a point to stand up for D’Avanzo as well as her friendship with her co-star.