Are you wondering where Derek Hough and sister Julianne Hough are on your television tonight? Why are they not on Dancing With the Stars this season? Has Derek quit the show? Sister Julianne Hough, who has been on the judges panel for three seasons, has decided to leave DWTS, making room for veteran judge Len Goodman to return to the ballroom.

In recent months, Julianne announced her departure from the show, telling People:

I will miss being on the panel for season 22, but have a lot of exciting stuff coming that I look forward to sharing. The pro dancers, producers and crew at DWTS will always be my family.

DWTS producer Rob Wade then said that he hopes to see Julianne back on the show in the future, to which Julianne replied:

I promise it’s not the last you’ll see of me in the ballroom.

So, it sounds like maybe Julianne will return to the series at some point down the road. But, who knows if Hough will return as a full-time judge.

As for Julianne’s brother, DWTS pro favorite Derek Hough, fans will be greatly saddened not to see him as a cast member this season. According to People, Derek is “sitting out” this season. Derek is currently taking on the legendary role Gene Kelly had in Singin’ in the Rain for Broadway. Perhaps once the Broadway musical wraps up, Derek Hough will return to Dancing With the Stars. When he was on DWTS while starring in the Manhattan production of the New York Spring Spectacular at Radio City Music Hall, Derek spread himself too thin and became injured. So, perhaps he didn’t want to risk hurting himself again.

Julianne Hough recently appeared in the movie Dirty Grandpa with Robert De Niro and Zac Efron as well as the production Grease Live!

Cross your fingers that Derek Hough at least makes an appearance some time this season on Dancing With the Stars. 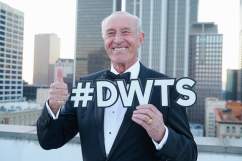 Read More
Dancing With The Stars, Derek Hough, DWTS, Julianne Hough, Reality TV, TV
Are Derek Hough and Julianne on Dancing With the Stars this season? Did they quit the show? Get the answers here.