It’s been months since we’ve been able to watch Empire, but the wait is almost over. (Facebook)

We have been waiting, quite literally, for a new episode of Empire and, finally, we’re going to get new episodes of Empire.

That’s right. The spring premiere of Empire is slated to air on March 30 and after weeks without new drama from the Lyon family, we have to admit that we’re more than ready for a brand-new hour of TV. We’ve got plenty of spoilers to talk about, but before we delve into all of them, let’s check out the latest preview spot for the remainder of this season:

Alright, now that we’ve gotten all up to speed on the drama of Empire, let’s talk spoilers. Except we aren’t going to talk about Wednesday night’s return. Instead, let’s talk finale.

That’s right, we’re jumping all the way to the end.

According to TVLine, the episode will reveal who pushed Rhonda (Kaitlin Doubleday) down the stairs in the midseason finale. Doubleday talked about the moment at the PaleyFest in March, saying:

She realizes who pushed her and… she gets to confront [him/her] in a very dynamic, scary, insane, crazy way,” Doubleday teased. “I think the audience [will be] waiting for that confrontation for all eight episodes.

It also might not be who viewers think it is. In other words, don’t put all your money on Anika. Doubleday, added:

It’s weird because it started out as a certain person, for sure. Then it changed for a bunch of episodes. There were a good five episodes we shot that I didn’t know who pushed me. Then they [settled] on somebody [and] that’s when she finally realizes, ‘OK, it was this person.’

Before Rhonda’s confrontation with her attacker, she’s also going to find a brand-new ally; Camilla. Yup, Rhonda and the Lyon family’s No. 1 enemy are going to team up and, according to Doubleday, that won’t even be the strangest alliance we’ll see in the second half of the season.

There’ll also be a new face on Empire in the waning episodes of its sophomore season. Welcome to the drama, Morocco Omari. The former Homeland star has signed on for a recurring role as Tariq Cousins an FBI agent who, according to TVLine, will “cause trouble for the ousted head of Empire Entertainment.”

That’s right, more trouble for Lucious (Terrence Howard) as he’s expected to face off against Tariq more than once in the next few episodes.

It’s going to be a fun next few weeks now that Empire is back on TV screens. We feel like we’ve been waiting for this drama forever and we’re going to enjoy it. 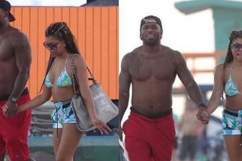 Who Is Taraji P. Henson Dating?