The man known as the fifth Beatle died at the age of 90 on March 8. Legendary producer George Martin, while being celebrated by every fan of the greatest band of all time, is being truly mourned by his wife of 50 years, Judy Lockhart Smith, as well as their two children, Lucie and Giles Martin. Judy was his second wife, he married a woman named Sheena Chisholm in 1948 and had two children with her, Alexis and Gregory Paul Martin. It was Judy who was the true love of his life.

1. They Met When She Was PA to George’s Boss at Parlophone Records & the Couple Had an Office Affair

In a Guardian feature on George Martin from 2001, it mentions that he met Judy while she worked as a personal assistant for his mentor at Parlophone Records, Oscar Preuss. It was Oscar Preuss who convinced George to stick to producing and give up his dreams of being a performer.

When Oscar Preuss passed away in 1958, George took on his job and thus inherited Judy as his assistant. It’s alleged that the two then embarked on a torrid office affair. The Guardian piece notes that it was Judy who convinced George to be a tough negotiator with Parlophone’s parent EMI. The newspaper describes her as having “a relaxed charm with a canny edge.”

A biography on George Martin from the Beatles Bible, says that in April 1962, he took Judy as his guest to an EMI event in the English beach resort town of Blackpool. The profile says that when EMI MD Len G. Wood found out, he was “livid.”

In 1965, the website Beatles Rarity says that George and Judy vacationed with John and Cynthia Lennon in Switzerland on a ski trip. George broke his foot soon after arriving and couldn’t ski, therefore spending most of his time working with John on the song “Norwegian Wood.”

2. She Was Honored With an Order of the British Empire Award from the Queen in 2012

She is the director of the Young Person’s Concert Foundation. George Martin was a patron of the organization. In December 2012, she was honored with an Order of the British Empire award from the Queen for her charitable works. Coincidentally, also honored that day was Paul McCartney’s daughter, Stella, for her services to fashion.

The couple even took their charitable efforts to the disaster plagued Caribbean island of Montserrat. George had earlier been awarded a Knight Bachelor honor from the Queen in 1996, according to his Beatles Wikia entry.

3. Their Son Continues on the Family’s Legacy in Music

RIP dad. I love you. I'm so proud to have been your son. I'll miss you more than words can say. Thank you for the all times we had together.

The Guardian reports that George and Judy had two children together, music producer Giles and marketing executive Lucy. On Giles’ Twitter page he describes himself as a “Producer, Music Director, Sound Experience Leader at Sonos- not the son of Phil Spector…” With his father, the duo worked on remixes of Beatle songs for the LOVE soundtrack album.

4. The Couple Lived in a Converted 14th Century Home in the English Countryside

The couple lived for most of the married life in the English country village of Wiltshire, about 100 miles west of London. A profile on George says that the couple’s home was “a 14th century converted rectory.” Video of the pair riding around in his convertible through the English countryside a la James Bond is featured in the 2012 documentary Produced by George Martin (Above).

5. Martin Had Met His First Wife While Serving in World War II

During World War II, George, then 17, enlisted in the Fleet Air Arm as an aircraft observer, according to an online bio. It was during this time that he met his wife, Jean “Sheena” Chisholm. They married in January 1948, on his 22nd birthday, but the marriage fell apart in 1965, five years after their son, actor Gregory Martin was born. 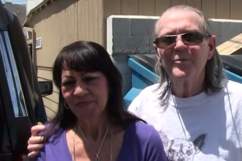 Read More
5 Fast Facts, Breaking News, Music
The man known as the fifth Beatle died at the age of 90 on March 8. Legendary producer George Martin, while being celebrated by every fan of the greatest band of all time, is being truly mourned by his wife of 50 years, Judy Lockhart Smith.