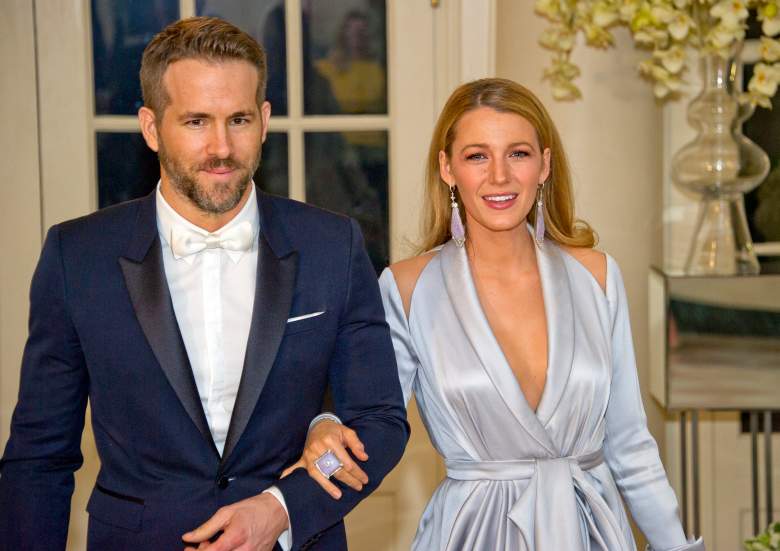 Ryan Reynolds and Blake Lively will soon expand their family to four. The famous couple are expecting their second child. (Getty)

Blake Lively was sporting a bit of a baby bump on the set of her upcoming film, The Shallows, wearing a tight wet suit. Us Weekly reports the Gossip Girl alum is expecting her second child with husband, Ryan Reynolds.

Lively, 28, and Reynolds, 39, try their best keep their personal life private and have not commented on the pregnancy. They welcomed their first child, a daughter named James, in December 2014. The couple met while filming the 2011 movie Green Lantern and got married in September 2012.

1. Lively Appeared to Have a Small Baby Bump on Movie Set

Blake Lively looks to be hiding her tummy as she does reshoots for The Shallows  https://t.co/oM901EhaEO pic.twitter.com/oGxYrJcz28

A photo of Lively on the set of her new film The Shallows revealed the actress’ small baby bump. Wearing a wet suit, she had a towel wrapped around her waist, but what was visible of her stomach showed the first signs of a pregnant belly. Us Weekly then confirmed that Lively is pregnant with her and Reynolds’ second child.

The newborn baby will have a big sister, James, who turned 1 in December. When Lively went into labor with their first child, Reynolds thought it would be hilarious to play Marvin Gaye’s “Let’s Get It On.” His wife was less than impressed.

“It was like steak knives came out of her eyes,” the Deadpool star told Seth Meyers on Late Night. “She was like, ‘Are you f**king s***ting me right now?’ Real bad. But she was a mercenary. I think I just caught her right in the middle of a contraction.”

2. Lively and Reynolds Come From Big Families and Want the Same for Their Family

Lively and Reynolds want to have a big family just like the ones they grew up in. (Getty)

The soon-to-be parents have made clear they both want big families, having grown up with lots of siblings. Reynolds grew up in Vancouver, Canada and is the youngest of four brothers. Lively grew up in a show business family in Los Angeles and has one older brother as well as two half-sisters and a half-brother.

The Sisterhood of the Traveling Pants actress dreamed of becoming a mom, even as a girl. She told Us Weekly in October 2014:

It’s something that I’ve always wanted ever since I was a little girl. I never knew what I wanted to do for a living but I knew I wanted to have a lot of kids because I had come from a big family, so it was always important to me. So it’s just the excitement of that finally being here.

So excited to grow her family, Lively once joked that she wanted to have 30 kids. She told told Marie Claire in a 2014 interview, “I gotta get started. If I could spit out a litter of kids, I would.”

Reynolds also expressed his desire for a big family before they even got pregnant with their first child. “A lot of people say it’s crazy, but we’ll only know when we’re there, you know? We’ll walk through that fire pretty happily, I think,” he told Details magazine in 2013.

3. They Welcomed Their First Child in 2014, But Kept Her Birthday Secret for a Year

Happy birthday to my baby girl! Sad I lost my virginity. But thankful I have a daughter.

Reynolds and Lively welcomed their first child, James, earlier than expected on Dec. 16, 2014. The proud father didn’t reveal his daughter’s exact birthday until a year later in a tweet wishing her a “Happy Birthday.”

The first-time parents have tried to keep their privacy surrounding their daughter and their relationship as much as possible for a celebrity couple. The pulled off a secret wedding at Boone Hall Plantation in Mount Pleasant, South Carolina before most people even knew they were engaged.

4. Reynolds Sneaks a Few Pics of James on His Social Media from Time to Time

Thumb wrestling isn't always fair. Curiously, my hand is the small one.

Reynolds has photos of his daughter, but never showing more than her hands or her feet. He got in a little hot water for the photo showing him wearing the baby carrier wrong, but admitted it wouldn’t be the last mistake he made as a father.

The baby is not properly secured in the vessel that I’m wearing there,” he said in an interview on Today in July 2015. “I’m a first-time dad, and that is not the first mistake I’ve made, and I can guarantee it won’t be the last.”