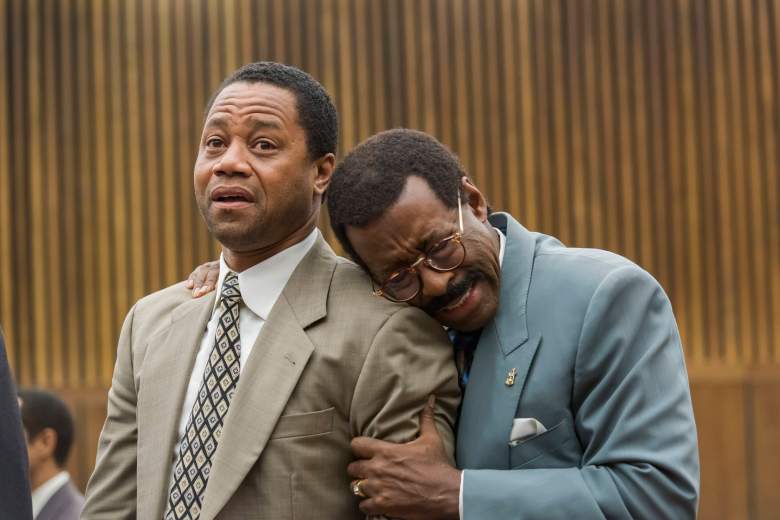 The episode opens with OJ being escorted by officers into a room of suit options for court. Johnnie Cochran tells him that, “Today is the day.” He also tells OJ to embrace any opportunity to speak in the courtroom. Marcia Clark objects to OJ Simpson speaking in court without being allowed to be cross-examined. OJ addresses the court and talks about the integrity of the jury and his innocence. He cries about his children wanting him to come home.

In the next scene, the dream team discusses the jurors and death threats against Cochran. Meanwhile, Cochran comes up with one of the most famous phrases said during the trial of the century. “If the gloves don’t fit, you must acquit.”

Clark and Darden are under great pressure to nail their closing argument. Clark thanks the jurors and talks about Mark Fuhrman being a racist. She says that there is an “ocean of evidence” that has been ignored because of distractions about race. Clark talks about hair fibers, DNA evidence, the gloves, witnesses, and all the other evidence against OJ Simpson. She also brings up that when OJ was told about his ex-wife’s death, he didn’t ask the police how she died.

Darden then gives his closing to the jurors, calling OJ’s relationship with his ex-wife a “ticking time bomb.” He brings up Nicole Brown Simpson’s beatings and phone calls to police about domestic abuse. Darden says that the case is not about the n-word; that it’s about OJ Simpson and the m-word – Murder. As Darden talks about the anger and hate inside OJ, OJ is shown crying in his chair. Darden says that OJ was “one hell of a great football player, but he’s still a murderer.”

Following Darden and Clark’s closing statements, Cochran gets up and addresses the domestic abuse right away, saying that those beatings do not add up to murder. He then takes the jurors back to 1985 when Fuhrman responded to a call from a successful black man with a white woman. Cochran says that Fuhrman hated seeing an interracial couple together. In the background, OJ Simpson continues to cry. Cochran says that what Fuhrman and the rest of the LAPD did to OJ Simpson was despicable. Cochran then brought up the gloves not fitting Simpson’s hands in court, saying, “If it doesn’t fit, you must acquit.” Cochran tries to convince the jury that the LAPD is framing Simpson in a giant cover up.

When Darden and Clark leave the courtroom, Clark says she’s taking her kids to Santa Barbara. The dream team also starts to discuss their plans for their leisure time. Robert Shapiro is left alone in the hallway by his fellow teammates who have grown apart from him over the course of the trial.

The jurors gather and begin voting via paper ballots. The not-guilty verdicts begin to pour in with just two guilty verdicts, seemingly from the only two white women in the group. One of them admits to her guilty vote, talking about the abundance of evidence. A discussion about the blood, the gloves and Mark Fuhrman erupts. With a few stubborn opinions, the two not-guilty votes are swayed. The entire determination totaled half a day. It was a shockingly short deliberation and the defense team becomes alarmed.

Johnnie Cochran and the dream team arrive to court surrounded by security, which enrages Shapiro, who refuses to ride along with the rest of the attorneys.

OJ Simpson has his last moments in jail and one of the guards (Eddie) tells him that it has been a pleasure guarding him, that he is a “stand-up guy.” Eddie also asks OJ to sign a football for his kid and tells him that he doesn’t need to be nervous at court.

Next we see Robert Kardashian leaving the courtroom, rushing to the bathroom to throw up in the sink. The case has taken its toll on him, especially since he’s grown to believe that his longtime friend OJ Simpson was actually guilty. Upon exiting the bathroom, he locks eyes with Clark.

Marcia Clark lights a cigarette in her boss’ office with Gil Garcetti and Darden. Clark cries that she’s so ashamed and Garcetti tells her to not be hard on herself. He says that he’s proud of her, that she didn’t play into the defense team’s games. Darden is shown shedding a single tear.
Garcetti addresses the press and says that he is disappointed by the verdict. He says that the jury’s verdict had to have been based on emotion rather than reason. Clark steps to the podium, who thanks the families of the victims. She then speaks about bringing awareness to victims of domestic violence. Darden then speaks to the press saying that his motivation throughout the trial was that he could deliver a fair verdict for the family of Ron Goldman. He says that he isn’t bitter or angry, but that he wanted to thank the prosecution team … Darden becomes overwhelmed with emotion and cannot finish his statement. The media then calls out to Gil Garcetti, asking him if they are going to look for the “real killer now.” Garcetti looks at the reporter in disbelief and disgust.

The Goldman family is heartbroken, as are Nicole Brown Simpson’s relatives.

Johnnie Cochran finds Chris Darden standing alone in a hallway and he tells Darden he appreciated how well he fought and what a great closing he delivered. Cochran tells Darden that when the dust settles, he’d like to help bring him back into the community. Darden tells Cochran that he never left. He tells Cochran that Cochran didn’t change anything for black people, that he just twisted the system. Darden then walks away.
Next we see Cochran greeted by a victory party in his office. Cochran then is called into his office to watch the news where Bill Clinton is shown talking about the issue of race and Cochran’s “victory.” Cochran begins to cry and says, “Our story is now out of the shadows.”
Darden approaches Clark and tells her that he is going to resign. He says that it’s all about image, which is not him. Clark is disappointed but understands. She then reveals that she was raped as a teenager by a waiter. She says she kept it a secret. Clarks says handling her first rape case was hell, but she has a need to get vengeance for victims and that is what justice is for her. She said she never doubted justice for victims until the OJ Simpson case.

Darden asks Clark what happened to the waiter who raped her and she says, “Same thing that happened today.” The two then head out of the office to get a drink together.

Robert Kardashian is shown picking up OJ Simpson as a free man. Simpson looks happy and refreshed while Kardashian looks saddened and worried. OJ tells Kardashian he has a surprise for him for always being there for him. OJ gives Kardashian the bible that he gave him when he was put in prison, saying that he wanted to return it because he knows how important it was to Kardashian. Kardashian accepts it and then starts to cry.
On the ride home, OJ Simpson tells Kardashian that he is going to party and have a good time to celebrate his being free and back in the Brentwood community. He pulls up to his neighborhood, which is full of protestors against him. Simpson then sees that not all is well just because he was found not-guilty.

Simpson arrives home and is embraced by his mother and family, but his two children with Nicole are not there as they are with Nicole’s family.
OJ Simpson is shown taking a shower and then looking at himself in the mirror. He then retreats to his bedroom and begins to cry. His tears are interrupted by a knock at the door and one of his sons coming in to see him with a new puppy as a gift. He wanted to make sure his dad “always had a friend.”

The Simpson family watch Shapiro in an interview with Barbara Walters. Shapiro says that the dream team dealt the race card from “the bottom of the deck.”

OJ Simpson holds a party at his house and makes a speech he had written. He says that he will pursue the real killer or killers of his ex-wife and Ron Goldman, making it his goal in life. His words are met with very little clapping and awkward silence.
Robert Kardashian’s reaction to Simpson’s speech is leaving the Bible on Simpson’s table and telling Simpson’s son Jason that he is done. Kardashian leaves.

When Simpson and his son try to make reservations for a little getaway, Simpson is denied entry to The Riviera because of who he is. He starts to realize that his life will never be the same.

The episode then shows what actually happened to each of the real people involved in the case after the trial ended:
– Marcia Clark resigned from the D.A.’s office and became a writer. She currently is a legal commentator for television.
– Chris Darden resigned and became a professor at Southwestern University Law School. He also opened his own law firm.
– Gil Garcetti lost in his re-election bid, but his son Eric is the current mayor of Los Angeles, California.
– Judge Lance Ito retired as a Supreme Court Judge in 2015 after a long career in Los Angeles.
– Robert Kardashian, father to the famous Kim, Khloe, Rob and Kourtney, later admitted his doubts about OJ Simpson’s innocence. He died of cancer in 2003.
– Johnnie Cochran continued defense work and now has offices in fifteen states. Unfortunately, Cochran died of a brain tumor in 2005.
– Robert Shapiro still practices law and has represented several other big name celebrities including Eva Longoria and Diana Ross.
– In Florida and Massachussetts, F. Lee Bailey was disbarred for attorney misconduct. Robert Shapiro actually testified against him at his hearing. They were friends no more.
– Mark Fuhrman was fired from the LAPD and was charged with perjury. He later went on to become an author and FOX News commentator.

After the trial, custody of OJ Simpson’s children was returned to him. Ron Goldman’s father filed a civil suit against Simpson in 1997 and Simpson was found guilty for the wrongful deaths of Goldman and ex-wife Nicole Brown Simpson. OJ Simpson was then ordered to pay $33 million, but the Goldman’s only ended up getting less than $500,000.
In 2008, Simpson was convicted of kidnapping and armed robbery in Las Vegas when trying to steal sports memorabilia. He was sentenced to 33 years in prison, but will be eligible for parole in 2017.