The third and final trailer for Paramount’s Star Trek Beyond was released today and features a brand new single from Rihanna called “Sledgehammer.” The track is already available for streaming right here.

The new trailer runs almost two minutes and doesn’t reveal much new about the plot. We find that the Enterprise is (once again) about to blow up and the crew crashes on a planet below. There, they have to do their best to survive and come face-to-face with a new villain played by Idris Elba. As for the Rihanna song, it works well in the context of the trailer, so it will be interesting to see how it is integrated into the film itself.

Star Trek Beyond has all of the main cast from the previous two Trek movies coming back, including Zachary Quinto, Chris Pine, Zoe Saldana, John Cho, Karl Urban and Simon Pegg. The film was completed before the death of Anton Yelchin, who plays Chekov. Justin Lin, who helmed a few of the Fast & Furious movies, replaced J.J. Abrams in the director’s chair. The film opens on July 22.

As for Rihanna, she released the album Anti in January and embarked on a world tour in March. Last night, she picked up the BET Award for Best Collaboration thanks to the hit “Work” with Drake. 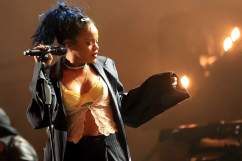 Rihanna Net Worth: 5 Fast Facts You Need to Know