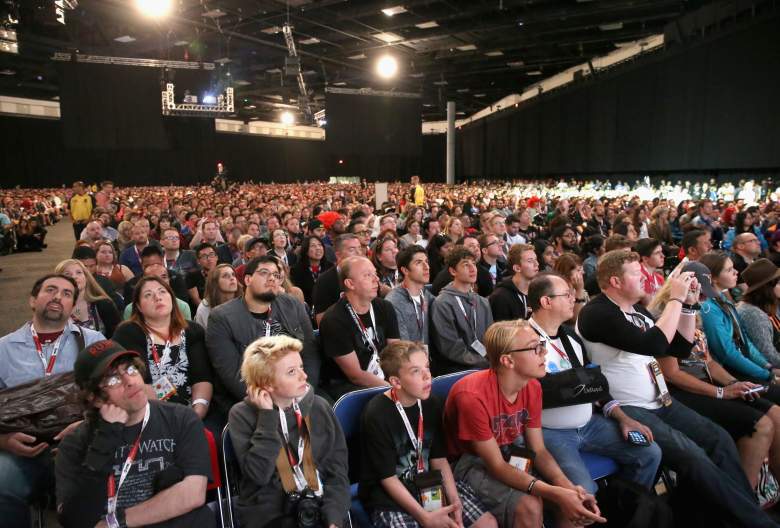 Last year, the most anticipated panel at SDCC was for Star Wars: The Force Awakens in Hall H. (Getty)

Hall H is the center of the media universe for four days in July every year during San Diego Comic Con International. It’s the place in the San Diego Convention Center where most of the biggest events take place. This year, there is quite a bit going on, even without a major Star Wars panel. That’s because Marvel Studios is making a comeback after taking a year off.

While conventions are best spent mulling around, it’s conceivable that you could spend the entire event in Hall H if you need to hear big announcements in person. According to SDCCBlog.com, Hall H had a capacity of 6,500 last year.

Here’s the schedule for Hall H this year.

11:45 a.m.-12:45 p.m.: Oliver Stone will make his SDCC debut to promote Snowden, his upcoming biopic about Edward Snowden. Actors Joseph Gordon-Levitt, Scott Eastwood, Shailene Woodley and Zachary Quinto will be on the panel.

1 p.m.-2 p.m.: Luc Besson will give his first Hall H presentation for Valerian and the City of a Thousand Planets. Stars Dane DeHaan and Cara Delevingne will be joined by producer Virginie Besson-Silla and Besson.

3:30 p.m.-4:30 p.m.: The “Under The Radar” panel is a talk about the best film festival genre movies with Fandango’s Erik David moderating. Slash director Clay Liford and Teen Wolf‘s Michael Johnston will also be there.

2:15 p.m.-3:15 p.m.: Game of Thrones producers David Benioff and D.B. Weiss only has an hour to talk about the upcoming season of the show. A handful of actors will returning up as well, with It’s Always Sunny in Philadelphia‘s Rob McElhenney moderating.

3:45 p.m.-4:35 p.m.: Dark Horse Comics is presenting a conversation with Joss Whedon, the creator of Buffy The Vampire Slayer and director of The Avengers.

5 p.m.-6 p.m.: Hardwick comes back to talk with the makers of South Park for the show’s 20th season.

6:30 p.m.-8:30 p.m.: AMC has booked two hours to talk about Preacher, the new show executive produced by Seth Rogen and Evan Goldberg. Stars Dominic Cooper and Ruth Negga will also be there. Kevin Smith is the moderator.

11:30 a.m.-1:30 p.m.: Here’s the big one. Warner Bros. has two hours to show off what it has cooking for future releases. The studio will show off as much as they can, as it’s the last time they can tease DC Comics fans with new Suicide Squad footage before it finally hits theaters. Other movies that will get previews are Wonder Woman, The LEGO Batman Movie, King Arthur: Legend of the Sword, Kong: Skull Island and Fantastic Beasts and Where to Find Them. Conan O’Brien is the host.

2 p.m.-3 p.m.: CBS has to follow the Warner Bros. panel with an hour-long celebration for Star Trek‘s 50th anniversary. William Shatner, Scott Bakula, Michael Dorn, Jeri Ryan and Brent Spiner will be there. Bryan Fuller, the executive producer of the new Star Trek series, might have some news too.

5:30 p.m.-6:45 p.m.: Marvel Studios is returning after taking SDCC 2015 off. There’s no word on what will happen at the panel at all, but expect a new trailer for Doctor Strange and some casting announcements.

7 p.m.-8:30 p.m.: The day ends with Kevin Smith getting 90 minutes to talk about whatever pops into his head. Smith didn’t get much of an audience last year since the famous Star Wars concert took place at the same time as his panel, so hopefully nothing interrupts him this year.

10 a.m.-11 a.m.: Sunday is light on big action in Hall H, but Sherlock fans will still want to get up early for a panel with actress Amanda Abbinton and creators Mark Gatiss and Steven Moffat.

1:45 p.m.-2:45 p.m.: The last Hall H panel is called “Re-Imagining Reality: Bringing Games Into The Real World with Ingress and Pokemon Go.” The panel will include Niantic founder John Hanke.