American Gods centers on the battle between gods inspired by legends of old and gods inspired by today’s technology. Shadow Moon, played by The 100‘s Ricky Whittle, is brought into the battle by Mr. Wednesday (Deadwood‘s Ian Mcshane) after the death of his wife (Emily Browning). Shadow isn’t sure he’s prepared for this, especially when he learns that his wife isn’t really dead.

Other members of the star-studded cast include Cloris Leachman, Gillian Anderson, Pablo Schreiber, Dane Cook, Crispin Glover, Peter Stormare, Jonathan Tucker, Orlando Jones and Yetide Badaki. During the SDCC panel, it was announced that Kristin Chenoweth will have a role as a goddess named Easter.

American Gods was developed for television by Michael Green and Hannibal‘s Bryan Fuller. Fuller won’t be able to devote all of his time to the series since he’s also working on CBS’ new Star Trek run. Chenoweth and Fuller also worked together on his cult series Pushing Daisies.

American Gods will debut next year. 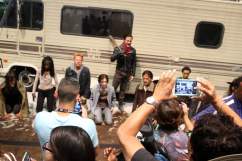