Last week on Big Brother there was a double eviction that really shook up the house and now a major alliance has broken up on BB18. Tonight, BFFs Paulie Calafiore and Corey Brooks are on the block and one of them is getting sent home … So, who got sent home tonight?

At first, Paulie started to feel sorry for himself, giving up, thinking that there was no future for him in the game. And, he didn’t want to campaign against his friend Corey for the save. Corey convinced his bud to stay positive and be strong, so Paulie got his head back in the game and got to work. He began persuading other contestants to protect him for various reasons. Meanwhile, Corey did not appear to be strategizing at all since Paulie seemed to be the one going home.

Unfortunately, Paulie was sent home despite his hopes to stay in the house. Upon being evicted, Paulie’s only chance of heading back into the game was if he had a round trip ticket from the secret Paris room in the house. Sadly for him, he only had a one-way ticket.

Now, all the tickets have expired and it was revealed that the holder of the round trip ticket turned out to be cast member Paul. 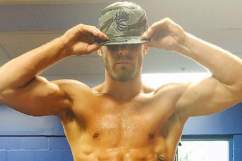 Read More
Big Brother, Reality TV, TV
Who got evicted on tonight's episode of Big Brother 18? Get all the details on who was eliminated off BB18 right here.