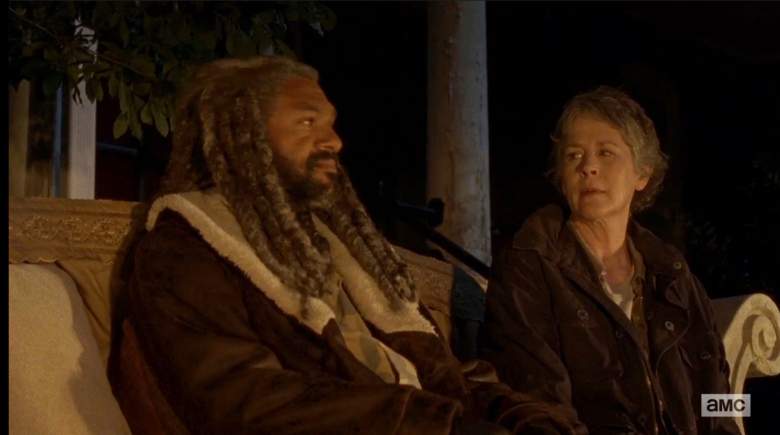 On Season 7 Episode 2 of The Walking Dead, we got to see a lot of interactions between Carol and Ezekiel. Read through the top theories and reactions to this episode. There will be spoilers below through episode 2. Then take the poll at the end of the article and let us know your opinion on a top Carol and Ezekiel theory.

Carol has been going through a mid-life crisis of sorts. She’s feeling incredibly guilty and heartbroken over the world she’s in and how many people she’s killed. So of course, once she entered The Kingdom, where everyone seems happy, she couldn’t adjust. She was suspicious. And she put on an act. It worked in Alexandria.

But we found out near the end that Ezekiel saw right through her. And he shared his background and history with her, so she would know that he was honest and she’d know where he was coming from. But he also gave her all the freedom she needed.

So Carol left, but she didn’t really leave — just like Ezekiel advised. And when the episode ended, he took Shiva and knocked on her door, offering her a pomegranate.

Here are some fan reactions and thoughts about Carol and Ezekiel:

I just love Carol! And love that King Ezekiel totally gets her. #TheWalkingDead pic.twitter.com/e5hsx9mRK8

Carol gone give King Ezekiel that Jazzy Jeff if he dont get tf off her porch w/ that damn tiger. #DeyWalking #TheWalkingDead pic.twitter.com/bRguziDu4o

I absolutely adore Carol and King Ezekiel together #TheWalkingDead

What do you think about the idea of a romantic future between Carol and Ezekiel?  Let us know in the poll below.