After 75 years of waiting to see the character come to life on the big screen, Wonder Woman is finally on her way and a new trailer is here to prove you aren’t dreaming. It’s filled with action, explosions and plenty of pulse-pounding music. But the film also looks really good. Warner Bros. is going to need this movie to be as good as the trailer looks after Suicide Squad and Batman v. Superman: Dawn of Justice were misses with critics and some fans.

This is the first new footage of the film seen since the San Diego Comic-Con trailer in July and follows a quick tease star Gal Gadot dropped on her Instagram page earlier this week.

Gadot stars as Diana, the Amazon princess who finds Steve Trevor (Chris Pine) washed up on the shore of Themyscira, the home of the Amazons. Steve and Diana leave the island and find themselves in the middle of World War I. We’ll learn the history behind the photo seen in Batman v. Superman: Dawn of Justice.

Wonder Woman was created by William Moulton Marston and debuted in All-Star Comics #8 in 1941. The film is being directed by Patty Jenkins as her first movie since Monster (2003). The film was written by Allen Heinberg (Grey’s Anatomy, The O.C.), with DC Chief Creative Officer Geoff Johns. It’s part of the DC Extended Universe, following Man of Steel, Batman v. Superman and Suicide Squad. Gadot made her debut in the role in Batman v. Superman and was easily the best part of the film.

In an interview with Entertainment Weekly in July, Gadot said of the character:

I feel like Diana is really accessible. It’s very easy to relate to her. She has the heart of a human so she can be emotional, she’s curious, she’s compassionate, she loves people. And then she has the powers of a goddess. She’s all for good, she fights for good, she believes in great. I want to be her. And in Wonder Woman, she has this naiveté in her. It isn’t stupid, it’s magical. I would want to be naïve like that again.

Wonder Woman hits theaters on June 2, 2017. The rest of the cast includes Robin Wright as Antiope, Connie Nielsen as Hippolyta and Lucy Davis as Etta Candy. Expect the trailer to be shown before Marvel’s Doctor Strange this weekend. 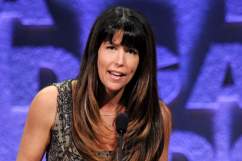