The classic film It’s a Wonderful Life celebrates its 70th anniversary with a showing on NBC tonight. It is a staple in Christmas movies and is a great family film. If you are hoping to catch the special on TV tonight, read below for all the details. 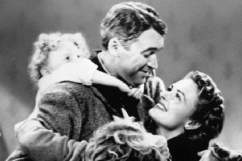 LIVE STREAM: Click here to check out how to watch the special via live stream.

NBC OFFICIAL PLOT SYNOPSIS: The NBC annual tradition continues as the iconic 1946 film once again returns to primetime. Directed by Frank Capra, “It’s a Wonderful Life” stars Jimmy Stewart as George Bailey, a discouraged and despairing savings and loan manager who contemplates suicide before a guardian angel, Clarence (Henry Travers), intervenes and allows him to see what his small town of Bedford Falls would be without him — and all that is right in his world.

Read More
TV
What time and channel is the full movie of It's A Wonderful Life on TV tonight? 2016 is the 70th anniversary of the film.