Quantico returns tonight with its Season 2 midseason premiere, and we definitely won’t be bored… tonight, the agents will be schooled in the art of seduction. That’s right, the CIA trainees will be learning about seduction on tonight’s episode, which is bound to lead to some steamy moments.

When we left off, Alex had accepted Ryan’s marriage proposal, but he’s being as shady as ever, and fans are worried their relationship is not on the best terms. Meanwhile, Jake’s ex-wife Hannah will make a return that will stir things up.

The show originally aired on Sundays, but will be moving to its new Monday time schedule.

On the mix stage for our return episode. Spoiler! pic.twitter.com/yN3VIFWKzp

EPISODE SYNOPSIS: In the Season 2 midseason premiere, the recruits are taught the art of seduction, which Alex utilizes to get closer to Owen; and, in the future, she learns who the terrorists are. 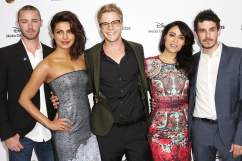