Anderson .Paak may not be a household name, but he is well on his way to becoming one. The California singer is currently making some of the most exciting, experimental, and funky R&B on the market with acclaimed albums like Venice (2014) and Malibu (2016). The latter earned a Grammy nomination for Best Urban Contemporary Album, while .Paak himself received a nomination for Best New Artist. Critics have likened him to a hybrid of Kendrick Lamar and Stevie Wonder, commending his musical grit and lyrical mixture of “high and hard times.”

.Paak (born Brandon Paak Anderson) has also collaborated with some of the biggest names in hip-hop, including Dr. Dre, The Game, Mac Miller, ScHoolboy Q and T.I. He performed at the Grammy Awards last Sunday, The Late Show With Jimmy Fallon on Wednesday, and tonight, he will perform again on The Late Late Show With James Corden. So, without further ado, here are five facts you need to know about Anderson .Paak.

1. He Was Once Homeless

.Paak’s path to stardom was not an easy one. His father went to prison for assault when he was seven, while his mother, the victim of said assault, would go to jail a decade later for failing to declare her income. The house that sheltered .Paak and his two sister was then foreclosed on, forcing the future singer to raise himself and endure years of hardship. By his mid-20s, Paak was married to his second wife, expecting his first child, and working on a weed farm in California. Upon losing his job in 2011, the young couple became homeless.

It was only after being taken in by fellow musician Shafiq Husayn (of the rap group Sa-Ra) that .Paak and his wife were able to get solid footing. Husayn put them up until .Paak could finish recording his debut album Venice, and was subsequently able to find a place for him and his family to live. When asked how he coped during this difficult period, .Paak told GigWise that “I’d always say to myself: there’s gotta be a better ending than this. It can’t be like this.”

.Paak married his first wife when he was 21 years-old, though the brief union didn’t last. “Soon as I married the girl, I was about to divorce her,” he admitted to LA Weekly, “I just wanted some stability. She was encouraging towards me singing and getting back into music… so I was grateful to have gone through that.” It wouldn’t be until he met Jae Lin, a fellow vocal student at the California Musicians Institute, that .Paak found what he considered to be true love. The two were married shortly after, and Lin stuck by the singer, even when they had no money and no place to live.

.Paak has been sure to keep his family life private now that he’s successful, but that hasn’t stopped him from praising his wife every chance he gets. He appeared on The Breakfast Club in 2016, saying: “This is the one that matters, Jae Lin… I’m a lover boy. Blame it on my mama. You only get a couple good marriages… she came from Korea and didn’t speak no english. She got the balls. But, no, not really.” The couple also have a six year-old son, Soul, who got to perform with his dad on a special birthday episode of Ellen. Check out the fun clip below.

Its safe to say that .Paak has had his struggles with money in the past. But given the meteoric rise he’s experienced as of late, it looks as though his net worth has done the same. Sources vary on the exact number, but most, including Article Bio put his estimated net worth at around $600,000. Most of this is from the singer’s album sales, asYes Lawd! debuted at number one on the Top R&B/Hip-Hop Albums on Billboard, while Malibu peaked at number eight and spawned the single “Am I Wrong?” featuring ScHoolboy Q.

The latter song also gave .Paak his first taste of endorsement money, as it was selected to appear in Google’s “Joy Ride by You, Phone by Google” commercial. The boost caused the single to sell an added 7,000 copies and earn over 1.5 million streams in the U.S., while rising to number one on Billboard & Clio’s Top TV Commercials chart. Frequent appearances on late night television and the singer’s recent Grammy nominations will only continue this upward gross.

4. He Is Part of the Duo NxWorries

When .Paak isn’t guesting on major label singles, he’s putting in work as one-half of the duo NxWorries (pronounced “No Worries”). He and New Jersey beatmaker Knxwledge released their EP Link Up & Suede in 2015, and quickly gained traction for their dusty, sample-driven approach to R&B. Paak brings the same intensity and vocal gymnastics that grace his solo records, but here, with Knxwledge’s funk-heavy approach, the music feels less modern and more like the best Blaxploitation soundtrack you’ve never heard.

In an interview with Complex in 2016, .Paak summed up the duo’s down-to-earth charm: “It’s the blues man. This is soul music, like what are you going to talk about? You always got all the money? You always the coolest n*gga? That’s not always the case, so I’m just trying to give full perspective on this.” NxWorries released their debut album Yes Lawd! on October 21, 2016 to unanimous critical acclaim. The duo performed the single “What More Can I Say” when they appeared on The Late Show With Jimmy Fallon this past Wednesday.

5. He Is Signed to Aftermath Entertainment

Anderson .Paak’s biggest co-sign has undoubtedly been from rap legend Dr. Dre. The Beats headphones mogul reached out to .Paak after hearing the NxWorries single “Suede,” and asked if he would be interested in contributing to the 2015 album Compton. “When I finally met him, I didn’t have super-fanboy jitter thing, where I couldn’t be myself,” Paak explained to The Guardian, “I was so confident by that point I just said: Let me get on the mic and try something.”

This confidence clearly paid off, as .Paak went on to co-write and sing on six of the tracks for Compton, more than any of the other guests– which included heavy hitters like Snoop Dogg, The Game, and Ice Cube. Dre was so impressed with the singer’s unique sound that he signed the singer to Aftermath Entertainment in January 2016. And given the producer’s track record of scouting talent (Eminem, 50 Cent, Kendrick Lamar), we’d say that’s a very good sign. Check out Dre’s announcement on Twitter.

Aftermath gets the last laugh ???? pic.twitter.com/Byu9ELOXtZ 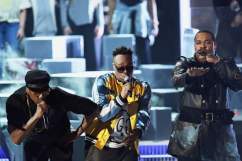