Italian model Bianca Balti was recently named one of Sports Illustrated newest Rookies. Speaking with Fox, Balti revealed that she wasn’t too surprised to hear the news. “I think I just wanted this so badly that it just happened… I also just think it’s so hilarious that at 32, I’m a Rookie …[but] we’re definitely seeing more changes in the fashion world. For example, plus sizes are being more than welcomed … And you still see supermodels who are working and they’re 30-35. It’s a good message. I still have to say though, that most girls on the runway are very, very young. But things are definitely changing in fashion and it’s amazing.”

Read on to learn more about Bianca Balti.

1. She Has Two Daughters

Balti admitted to Fox that she didn’t always have a model-ready body. “When I was pregnant with my second baby I almost gained 50 pounds… I enjoyed my pregnancy, but then I had to lose the weight for work. I had contracts and I had to get back in shape immediately. It took me some time. But I’ve never felt so empowered like I did when I got back in shape because, besides feeling good about my body, it’s just empowering to set a goal and make it happen.”

She trained twice a day in order to lose the weight, while also breastfeeding her baby. “It wasn’t easy,” said Balti. “I was… eating less than I would have liked to, but that doesn’t mean not enough because I was also breastfeeding my baby. It did take a lot of hard work. But if you want it badly enough, you can do it, too.”

According to Sport Illustrated’s profile, Bianca started modeling in university, where she was studying graphic design and web. Speaking to the outlet, Bianca said, “I was very naughty… That’s the reason I didn’t go very much to the university, because I was partying with my friends more than going to the university. When I found this job [as a model], my mom was so relieved.” 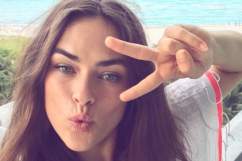 3. She Was Married to an Italian Photographer

From 2006 to 2010, Balti was married to photographer Christian Lucidi.

Balti went to Instagram to announce Mia’s birth with a post that read, “I’m so blessed to announce the birth of Mia McRae !!!!. 14th of April 2015 at 9.05am – 2.8kg. She’s going to be so loved by me, her proud daddy Matthew and her big sister Matilde! I’m literally the most thankful human being in the world! THANK YOU GOD!”

Two months before giving birth, Balti walked the catwalk with a baby bump for Golce & Gabbana’s Autumn/Winter collection at Milan’s fashion week. According to Hello Magazine, three models who walked that day were pregnant.

4. She Has Four Tattoos

According to Sports Illustrated, Balti has four tattoos and wants more.

The M on her left ring finger stands for “mama”, her husband (Matthew), and her daughters’ names.

A 2014 article in Emirates Woman states that Balti was once referred to by Playboy as “The world’s hottest Italian supermodel,” and describes Balti as being “refreshingly candid.”

Bianca has been the face of Dolce & Gabbana and L’Oreal, and according to the 2014 Emirates Woman article, she was, at the time, one of the three best-paid models in Italy, along with Eva Riccobono and Mariacarla Bscono. She tells the outlet, “I think it was meant to be… I think that was the plan God had for me. I live one day at the time and I don’t stress myself out too much thinking about what it would have been or what it will be.”