Kourtney Jorge is the woman who has become known as #HurtBae. She and her ex-boyfriend starred in a video talking in an honest and heart-wrenching fashion about the infidelity in their relationship.

The video went viral, and #HurtBae was trending across social media.

Jorge, a 23-year-old New York City resident originally from Atlanta, was surprised by her newfound fame.

You can watch the video, posted February 15 by The Scene, above. The video was produced by Condé Nast Entertainment, which operates The Scene.

In the nearly 7-minute video, a man and a woman, Kourtney and her ex-boyfriend, Leonard, talk to each other face to face about cheating.

Leonard, whose full name isn’t known, hasn’t commented about the video yet.

Here’s what you need to know about Kourtney Jorge:

1. Jorge Says She Never Thought So Many People Would See the Video & Is Happy if it Helped Others

Kourtney Jorge took to social media herself on Thursday to respond to the viral video.

Kourtney “recently started talking to someone last month,” but is “not in a relationship.”

As for Leonard, he is in a relationship, “he got a (girlfriend) right after the interview.”

The video was recorded back in October 2016, shortly after the couple broke up. 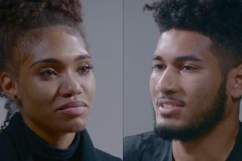 2. She Has Thanked People for Their Support & Says She Got ‘So Many Stares on the Subway’

After she trended on Twitter throughout the night, Kourtney woke up Thursday morning and thanked those who supported her. She also said she got a lot of stares on the subway on the way to work.

So many stares on the Subway this morning ?

“I wanted to thank you all soooo much for your support. This entire experience has been incredibly overwhelming – I never thought the video would receive this type of response,” she wrote on Instagram. “Again, thank y’all for the support. I am definitely in a much better place now. #HurtBae ?☺️?.”

3. She Has Called Out Several Fake Accounts, Including One Trying to Raise Money in Her Name

Kourtney has tried to stop the handful of fake Twitter, Instagram and Snapchat accounts popping up in her name. One account even tried to raise money on Paypal, she said.

I do not want money via PayPal. That is NOT me! Please don't give them anything and unfollow

Please report any other page that's pretending to b her #sistweet

Another fake account has more than 50,000 followers, and has been quoted in news articles about Kourtney. That account, @creolekourt, blocked the real Kourtney.

4. She Works in New York City & Has Also Been a Model

Kourtney Jorge works in New York City, according to her Facebook page.

She has also worked as a model and was an intern at Essence Magazine while she was in college.

5. She Graduated From Spelman College in 2015

Kourtney graduated from Spelman College in 2015, according to her Facebook page. She wrote about her experience at a historically black college in a Facebook post a few months after her graduation:

Every day I wake up at around 7am and ride the New York City subway for almost an hour to work. And everyday it’s worth it.. Though my job is not a corporate company, it is a very prestigious organization. Every day of the week I am in, if not one, multiple meetings. I find myself looking around the room in these meetings and never see a face like mine. I am the youngest (I’m only 22) person in the office. Not only am I the youngest, I am also a woman, and on top of that I am a black woman. I’m thankful that I went to an HBCU…Spelman in particular, because I was taught that I could change the world. Even though I see mostly old white men in suits at work, I know I am capable of accomplishing anything and reaching a great magnitude of success. All thanks to my institution?? and my family. #FeelingVeryBlessed

In the video, Kourtney and her ex-boyfriend, Leonard, talk about how they met while they were in college together.

Read More
5 Fast Facts, Breaking News, Social Media, Twitter, Viral
Kourtney Jorge is #HurtBae, the woman in a viral video talking about cheating with her ex-boyfriend, Leonard. Here is what you need to know about her.