A South Carolina man with ties to white supremacist extremists is accused of plotting an attack on a synagogue “in the spirit of Dylann Roof,” federal authorities say.

Benjamin Thomas Samuel McDowell, 29, was taken into custody Wednesday night on a gun charge after a FBI investigation that began in December, the U.S. Attorney for the District of South Carolina said in a press release. The investigation began after he made a threatening post toward a synagogue on Facebook, the FBI says.

McDowell is charged with being a felon in possession of a firearm, U.S. Attorney Beth Drake said.

According to court documents, McDowell talked to an undercover FBI agent about his plans for an attack, and bought a gun through him.

McDowell told an undercover FBI agent he wanted to “conduct an attack on non-whites without getting caught,” according to court documents.

Roof was sentenced to death in January for killing nine people in a racially motivated attack on a historically black church in Charleston, South Carolina.

Benjamin McDowell, who posted on Facebook as Sam McDowell, and also goes by Benji McDowell, came onto the FBI’s radar after a December 26, 2016, threat toward a synagogue, according to court documents.

In a Facebook post he wrote, “I love love to act what u think,” with a link to the website for the Temple Emanu-El, a conservative synagogue in Myrtle Beach, South Carolina, FBI Special Agent Grant Lowe wrote in an affidavit.

Another post, rambling and filled with typos, in January also caught the eye of authorities:

Dylann roof did what these tattoos wearing so badass is supposed to be doing they don’t give f*** about their white race. All they wanne do is stay loaded on drugs the Jews put here to destory white man and they feast on the drugs. they should be Feasting on the enemy that stole their Heritage and their bloodline and trying to run us off of this Earth you can post pictures of f***** Viking swords and all the s*** you want to post if you ain’t got the heart to fight for Yahweh like dylann roof did you need to shut the f*** up damng right I’m pissed off when I see a f***** white young and disable beat him to death before f****** n***** and white people running their f****** mouth not doing nothing!!!!!!! damn right I’m pissed off.

It appears McDowell was referencing the kidnapping and torture of a mentally disabled white teenager by four black teens in Chicago, which was streamed live on Facebook. That incident occurred on January 4, a day before the above January 5 post.

On January 6, McDowell talked to an undercover FBI agent by Facebook Messenger, according to court documents. He requested an “iron,” which is code for a gun, Lowe wrote in the affidavit.

He met with the undercover agent on January 12, believing he was a person who “handled problems for the Aryan Nations.”

During a meeting with the agent, McDowell talked about his frustrations with other white supremacists, Lowe said in the affidavit. He said “screaming ‘white power'” is “not getting the job done,” Lowe wrote. According to the affidavit he told the agent:

I got the heart to do that sh*t, but I don’t have the good training. I’m wanting to do this sh*t, and I got the heart to do this. I seen what Dylann Roof did and in my heart I reckon I got a little bit of hatred … I want to do that sh*t. Like, I got desire … not for nobody else … I want something where I can say ‘I f*cking did that’ … me personally. If I could do something on a f*cking big scale and write on the f*cking building or whatever, ‘In the spirit of Dylann Roof.’

McDowell told the agent he believes in white power and hates non-whites, according to court documents.

In a post on January 25 he wrote on Facebook he wanted to “clean up world jewelry,” appearing to mean “jewry:

I wish the day we all get off Facebook and white Warriors like we was born to be like Dylann roof but we gotta do it in a smart way and it takes a team it takes no drugs and party and more planning for the real Victory and not just saying it but should want Bloodshed 2 crave it and be fanatic for your white race and for Yahweh God they’ve been murder and killed our birth rites our white race. Its impossible live the 14 word and let ungodly people destroy our race.

According to the Southern Poverty Law Center, the 14 words references a white supremacist code for the phrase, “We must secure the existence of our people and a future for white children.”

While McDowell ranted against drug use in Facebook posts and with the undercover agent, he was caught with a marijuana cigarette when arrested Wednesday, according to court documents. He also had marijuana in his possession during meetings with the agent, the FBI said.

2. McDowell Told an FBI Agent He Wanted to Commit the Attack Outside the County Where He Lives & Get Away ‘Scot-Free’

McDowell told the undercover FBI agent he wanted to commit the attack outside Horry County and wanted to get away “scot-free,” according to court documents.

In a phone call with the agent he said, “I just be plotting it out, like, I mean you just run up there on them if they back there partying, and all, with a f*cking AK and rip them sumbitches down, and throw, a damn, something at them,” according to court documents.

But he told the agent he didn’t know where he would carry out the attack, according to the FBI.

McDowell asked the agent for either a .38 caliber or .40 caliber weapon, and they agreed the agent would get him a .40 caliber Glock, the FBI said. On February 10, he told the undercover agent he wanted hollow point ammunition, according to court documents.

McDowell appeared concerned about who was listening to his conversations, according to court documents:

On February 15, the agent picked up McDowell at his mother’s house in Conway, South Carolina, and drove him to McDowell’s grandfather’s house, about a mile away, according to court documents. He then acquired money from his grandfather to pay for the gun and ammunition.

The FBI says the agent gave McDowell the gun, which had its firing pin shaved down with McDowell’s knowledge so it would not work, and hollow point ammo for about $109.

McDowell was then taken into custody.

He is not facing any charges related to the attack. He was arrested after meeting the undercover agent at a motel to buy a gun from him, prosecutors said.

3. McDowell’s Mother Says He Thought Roof Was ‘Brave’ Because He ‘Stood Up for White People’

McDowell’s mother, Joanne Clewis, told The State newspaper when contacted by phone, “All I have to say is that I love my son, and I don’t have any comments.”

But she later talked extensively with WBTW-TV, telling them, “He just said that that boy (Roof) was brave, and he made headlines as a white boy, but he said he (Roof) was wrong to go in the church and shoot up like he did, and he said, he (Roof) stood up for the white people,” Clewis told the news station.

She said he also spoke out against Black Lives Matter.

“He said, the way the Black Lives and all that are doing what they’re doing, they’re out there getting by with that. And he said, ‘If any of us was to stand up for that, to stand up for us, it would be awful,’ and he said, ‘It’s not right that they can stand up and we can’t’,” Clewis told WBTW.

She said her son was raised better than that, and they went to church when he was young.

McDowell is being held in county jail after making his first court appearance on Thursday. A detention hearing is scheduled for February 21.

If convicted of the federal charge, he faces up to one year in prison.

It is not clear if he could face additional charges or if the investigation has been closed. He will be appointed a federal public defender.

His mother said jail might be the best place for him.

“I don’t want him to be confined because his nerves are bad, but, you know, if he’s feeling the way he’s feeling and everything, I’d rather know he’s better off where he’s at than on the street because someone could kill him,” Clewis said. “I feel like he done wrong, but I’ve paid for it, and that don’t seem to be fair, but if I have to go through this for him to get help, and me love him and stand by him, that’s all I can do.”

4. He Has Convictions for Assault, Burglary & Malicious Injuries to Animals & the Feds Say He Made White Supremacist Connections While in Jail

McDowell has been arrested at least seven times since 2007, according to Horry County court records available online.

In 2007, he was convicted of malicious injury to animals. He was charged in 2009 with second-degree burglary (violent) and third-degree burglary and sentenced to six years in prison, suspended after three years.

That same year he was sentenced to 30 days in jail for third-degree assault and battery.

According to court documents, McDowell made connections with white supremacist extremists while in jail on previous charges.

He has several tattoos, and the FBI said they indicate his affiliation with white supremacists.

According to The State newspaper, McDowell has more than a dozen tattoos on his chest, shoulders and extremities, records from the State Law Enforcement Division indicate. The records did not include details of the tattoos.

Heidi Beirich, an expert in extremism with the Southern Poverty Law Center, told The State that domestic terrorism has been growing in recent years while much of the focus has been on Islamic terrorism.

Beirich said there is an “inability to conceive of the fact that there is so much terrorism coming from white people. That’s not to say that Islamic extremism isn’t important. But the fact of the matter is that 85 percent of domestic terrorist attacks in recent years have been committed by people with beliefs like (McDowell’s).” 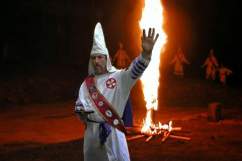 5. Jewish Groups Have Reported a Rise in Anti-Semitic Incidents Around the Country & President Trump Has Brushed Off Questions About That

Jewish groups have reported an uptick in anti-Semitic incidents over the past month across the country.

“I’ve been in the business for 20-plus years, and this is unprecedented,” Paul Goldenberg, national director of the Secure Community Network, which advises Jewish organizations on security, told CNN. “It’s more methodical than meets the eye.”

President Donald Trump has been asked in two press conferences, including one with Israeli Prime Minister Benjamin Netanyahu, about the incidents, and has brushed off the questions. He has said he is the least anti-Semitic person possible, and has repeatedly mentioned his Jewish son-in-law and adviser, Jared Kushner, along with his daughter-in-law and grandchildren.

On Thursday, he was asked again about the anti-Semitism, this time by a Jewish reporter.

“We are going to do everything within our power to stop long simmering racism and every other thing that’s going on,” Trump eventually said.

Loading more stories
wpDiscuz
7
0
Would love your thoughts, please comment.x
()
x
| Reply
Benjamin McDowell, a 29-year-old South Carolina man with white supremacist ties, has been accused of planning an attack "in the spirit of Dylann Roof"