Madiba is the life story of Nelson Mandela and Laurence Fishburne stars in the three-part mini-series, which airs on the BET network. BET’s official synopsis of the series reads: Madiba, based on two Mandela autobiographies, Conversations with Myself and Nelson Mandela by Himself, tells the most personal and comprehensive story of Mandela’s life, focusing on the man, and his innermost thoughts and fears as he fought and sacrificed for freedom to become an international icon. While many recognize Mandela as the face of the Anti-Apartheid Movement, this mini-series also pays homage to the many lesser known men and women who sacrificed and suffered alongside of him in South Africa’s quest for freedom. The series stars some familiar faces as well as some newcomers and we’ve got the details on the cast.

You may know Laurence Fishburne from The Matrix Trilogy, Black-ish, and Batman vs Superman: Dawn of Justice. Now he stars as Nelson Mandela in Madiba.

Her smile makes me smile. Her laugh's my soul's favorite song. My loves always here forever strong. In her lifetime, she has only seen a black President & 1st lady. Seems strange to gain wisdom from the mouths of babies. I tell her everyday her giggles light the sun. Date nights always magic with my very special someone. ICYMI Raquel Jones is awesome ?? #prouddad #girlpower

Many recognize Jones from Sleepy Hollow and Drumline, but now he stars as Nelson Mandela’s good friend Oliver Tambo.

Top of the World.

Harewood is a star from Homeland, The Night Manager, and Supergirl. In Madiba, he appears as Walter Sisulu, a close friend of Nelson Mandela.

Nvqvist can be recognized from The Girl With the Dragon Tattoo and now he stars as Dr. H.F. Verwoerd. Verwoerd was the prime minister of the Apartheid-era South Africa from 1958 until he was assassinated in 1966.

Pheto has starred in Catch a Fire and Tsotsi, but now she plays the role of Winnie Mandela. Winnie was Nelson Mandela’s second wife. He was married three times. 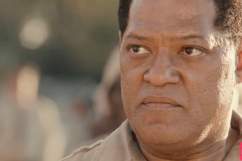