Tonight, Once Upon a Time returns on ABC. Emma, Hook, and the Charmings will fight the Savior as Gideon wreaks havoc on Storybrooke. In a recent interview with Collider, showrunners Adam Horowitz and Eddy Kitsis spoke about what to expect in the upcoming season. Kitsis said, “The big themes for the second half of the season are belief and fate, what is a happy ending, and do the ends justify the means. We’re asking the big life questions that we all do, in how they relate to our characters.”

Horowitz added on that in the remaining half of Season 6, Emma will struggle to find her identity and place in the world, but will be tested on a number of levels. “She has seen a path of what she would look like not being the Savior, and she knows that’s not who she is. But part of being a hero means other people’s happiness comes before your own.”

Read on to get the details on when to watch the show tonight.

EPISODE DESCRIPTION: “Tougher than the Rest” – Gideon makes a confession to Belle and Gold concerning his past whereabouts. Meanwhile, David and Hook try to stop Gideon from confronting Emma; Regina worries that an alternate world presents a better outcome; and Emma learns how to change her fate. 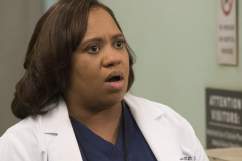 Why Isn’t Grey’s Anatomy on Tonight?