Time After Time is a new TV drama that premieres tonight and we have all the details for new watchers below. Read on to find out what time the show airs, what channel to watch, cast info and episode details.

LIVE STREAM: Click here for instructions on how to watch the show via live stream online.

OFFICIAL ABC SERIES SYNOPSIS: Based on the novel and 1979 movie of the same name “Time After Time” follows the adventures of famed science fiction writer H.G. Wells as he pursues on of history’s most well-known serial killers, Jack the Ripper. Using a time machine, the two travel from the late 19th century to end up in modern day Manhattan. Once he arrives in New York, H.G. finds himself in awe of a world he never believed possible, bit it’s not only the advancements of the age that catch his eye … the young and beautiful Jane Walker also captivates him.

EPISODE 1 SYNOPSIS: “Pilot” – Using the 1979 novel and movie as a launching point, “Time After Time” chronicles the adventures of a young H.G. Wells, as he travels through centuries, decades and days in the time machine he created. In the pursuit of the charismatic (yet secretly psychopathic) Dr. John Stevenson, better known as “Jack the Ripper,” Wells arrives in modern day New York City, searching for Stevenson after the doctor escapes authorities in Wells’ London home. But instead of the Utopia he imagined, Wells finds a world more aligned with Stevenson’s temperament in a series charged with danger and adventure, and centered in thrills, satire, humor – and most of all, an epic love story.

EPISODE 2 SYNOPSIS: “I Will Catch You” – Presented with the real possibility that Vanessa Anders is in fact Wells’ great granddaughter, H.G. and Jane continue to search for Dr. John Stevenson, but when their final face-to-face meeting goes anything but planned, the doctor is back on the loose.

EPISODE 3 SYNOPSIS: “Out of Time” – H.G. and Jane rush to repair the damaged time machine before Dr. John Stevenson – now better known as “The Key Killer” – strikes again. Meanwhile, Vanessa must decide whether or not to confide in Griffin.

EPISODE 4 SYNOPSIS: “Secrets Stolen” – Dr. John Stevenson has met his match in a stunning – and equally cunning – doctor named Brooke, while H.G. and Jane travel back to the 1980’s where they make a shocking discovery that could change Vanessa’s life. 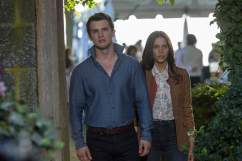 Read More
TV
The premiere of TV show Time After Time is tonight. Get the details on when it's on, the start date, what channel to watch and more.