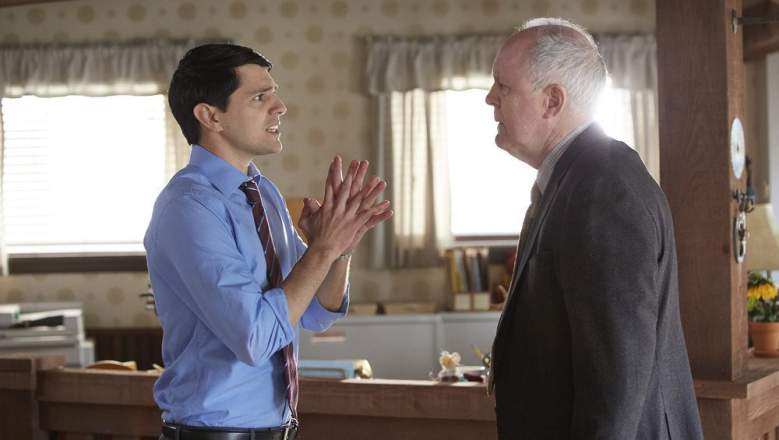 Nick D’Agosto as Josh and John Lithgow as Larry (Photo by: Tyler Golden/NBC)

Trial & Error is exactly the kind of sitcom you expect to see on NBC. The mockumentary series that pokes fun at all the real-life crime drama documentaries that are in vogue today (like Making a Murderer or The Jinx and debuts on Tuesday, March 14 at 10:01 p.m. ET. Read on for a preview of the series.

In the series, John Lithgow stars as Larry Henderson (an obvious homage to another famous character he played), who is accused of murdering his wife. New York attorney Josh Segal (Nicholas D’Agosto of Gotham) is tasked with defending Larry in his first big case. He soon learns that Larry probably did it and the people he has to work with in East Peck, South Carolina aren’t the smartest tools in the shed.

After the pilot, NBC will also air episode two, titled “A Wrench in the Case.” In this episode, Josh finds some DNA that might help exonerate Larry, but his client is more interested in a skate wrench.

NBC will also repeat the pilot on Thursday, March 16 in place of Powerless at 8:30 p.m.

Next week, NBC will air two more episodes at 9:00 p.m. ET and 9:30 p.m. ET on Tuesday, March 21. This will be the show’s regular timeslot, right after new episodes of The Voice. NBC plans on rushing through all initial episodes of Trial & Error, and will finish up on Tuesday, April 18. A week later, Great News will debut in Trial & Error‘s timeslot.

CHANNEL: NBC (To find out which channel NBC is for you, click here to go to TVGuide.com. Then, change “Provider” to your cable/satellite provider.)

Read More
John Lithgow, NBC, TV
Trial & Error, the new mockumentary series starring John Lithgow, airs tonight on NBC. Find out when the show starts and what it's about.