Audio from the evening Chris Soules fled the scene of a hit-and-run accident has been released by Iowa authorities.

The former Bachelor star allegedly crashed into the back of a John Deere tractor April 24 and fled the scene. A farmer was killed in the crash, sheriff’s officials in Iowa said.

In the chilling audio, a dispatcher is heard saying that the driver of the trailer is laying unconscious in a ditch while CPR is being performed. Police then go on a hunt for Soules and his red truck.

Listen to the 911 audio below courtesy of The Des Moines Register:

Police caught up with Soules after a few hours at a nearby house and took him into custody. According to KWBE 1450 AM, the arrest report says that Soules “possessed alcoholic beverages/containers” when police caught up with him. But it didn’t say whether intoxication played a role in the crash.

Souls has since been charged with a felony for leaving the scene of an accident causing death. He faces up for five years in prison if convicted. The cause of the crash is still under investigation by authorities in Iowa.

The victim in the crash was identified as Kenneth Mosher, a 66-year-old farmer from Aurora, Iowa. He was a veteran of the Vietnam war and a grandfather.

Soules, a 36-year-old farmer in Iowa, starred on Season 19 of The Bachelor and then appeared on a season of Dancing With the Stars after that. 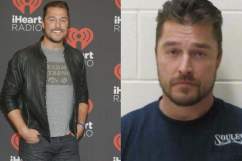