It’s official: Tiny Harris and T.I. are calling it quits. According to Hot New Hip Hop, Harris, formerly of the R&B group Xscape, finally served her husband with divorce papers, after initially filing for them back in December 2016.

After months of speculation as to whether or not the couple would reconcile, Harris decided that enough was enough and has allegedly been very direct in her demands. She’s seeking primary physical custody of their three children, and has asked the judge to determine the amount of child support T.I. will be obligated to pay. This also goes for health insurance coverage and visitation rights, says HNPP. Harris is also seeking permanent alimony to maintain her family’s standard of living after she officially splits from T.I. (born Clifford Joseph Harris).

Tiny poses with 1 of the family cars attends AKOO’s 2nd Annual ‘A King Of Oneself Brunch’ Hosted By T.I. at Ocean Prime on September 30, 2012 in Atlanta, Georgia. (Photo by Rick Diamond/Getty)

Harris recently discussed her marriage on The Wendy Williams Show, where she revealed that the couple were allowed to see who they wanted to in secret, and that T.I.’s publicized affair with Instagram model Bernice Burgos was not the cause of their divorce. “She had nothing to do with whatever was going on with us before,” said Harris, “We were already going through whatever we were going through. She came in the picture after I filed for divorce.” Watch the full interview below.

In addition to her custody demands, Harris has requested that T.I. hand over all of his financial records. Given that the legendary emcee has a larger income than her, she has deemed it his responsibility to pay off the Harris family taxes and/or any outstanding debts. The IRS reports that the couple owed $6,211,424.76 last year.

2017 will see not only the end of their marriage, but the final season of their long-running VH1 series T.I. & Tiny: The Family Hustle. As Harris told Wendy Williams, the stress of keeping up a show “did put a little strain on [their marriage], because it keeps people in your business.” 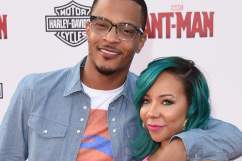 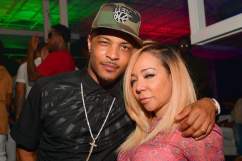 Read More
Divorce, Hip-Hop, T.I., VH1
After months of speculation as to whether the couple would actually split, Tiny Harris has served T.I. with divorce papers.