If you recorded Samurai Jack Season 5 Episode 4, you may have noticed that a different show was playing instead: Rick and Morty. What happened? Did the show air at a different time? No. It turns out that in honor of April Fool’s, Adult Swim aired the season premiere of Rick and Morty season 3 instead of Samurai Jack‘s next episode. The episode you’ve been waiting for will air next week instead.

Which one is this? https://t.co/Bekf1VIud9

Some fans were pretty upset about the unexpected change, while Rick and Morty fans were celebrating. Here’s what some Samurai Jack fans had to say:

#rickAndMorty fans: oh be cool we had to wait 18 whole months for this!#samuraijack fans: pic.twitter.com/REtK5CRj7z

#Toonami #samuraijack Look, I don't hate Rick and Morty, but it has its own timeslot. Samurai Jack has only 1. Priorities @adultswim

No big deal. Not like I've gone nearly 13 YEARS waiting for #samuraijack
Give the kids their Rick and Morty.
Good for them.
I hate you.

@adultswim this isn't a funny joke at all #samuraijack pic.twitter.com/gd5kHCQ22d

Here’s a trailer for Episode 4, airing next week:

See more stories about Rick and Morty below: 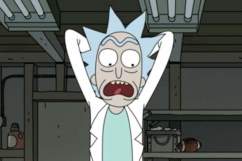 And here’s a story about Samurai Jack:

Read More
Adult Swim, Samurai Jack, Television, TV
If you recorded Samurai Jack Season 5 Episode 4, you may have noticed that Rick and Morty was playing instead. What happened?