Tonight, Brett Eldredge will take the stage at The Cosmopolitan of Las Vegas Chelsea Ballroom, where he’ll performa a surprise concert as part of CMT Instant Jam. But what’s the singer’s love life like these day? Is he single? In a relationship?

For a while now, no new news has surfaced regarding the Eldredge’s relationship status, leading us to believe he is single.

In June 2016, the 31-year-old was rumored to be dating Victoria’s Secret model Rachel Hilbert after the two were seen hanging out in Miami. Hilbert was just 21 at the time, and presumably met Brett on the set of his music video for the song “Lose My Mind”. Last year, Hilbert posted a few photos of her and Eldredge, like the one below, but hasn’t done so since, meaning it’s probably over between them.

In November 2015, Eldredge sat down with CBS to confirm that he was single. He even dished to the news station, “It is funny how some girls will introduce me to their mom or whatever or their mom will be like, ‘I need you to meet my daughter she’d be perfect for you.’ It’s so funny for me because I mean I’d love to meet their daughter I mean you never know you never know. But I’m being single right now just taking my time and trying to find the right thing… But it is always interesting to see how people introduce… I’ll meet somebody’s grandma and she’ll go, ‘You need to meet my granddaughter’ so, it’s funny and I love meeting people like that.”

So what’s made him so busy lately? Music, of course! Brett recently released his new single, “Somethin’ I’m Good At”,  co-written with Tom Douglas, as part of his upcoming fourth studio album.

Speaking about the song, Eldredge dished to Rolling Stone, “I really wanted to show my personality… And to show the crazy, fun feeling of life I have and want to remind myself and everyone to have. It’s a song about embracing your faults and quirks but finally finding something you are good at – which, in my case, is making a girl smile.” Well, it certainly seems like Eldredge is capable of finding himself a woman, now it just comes down to who the lucky lady will be! 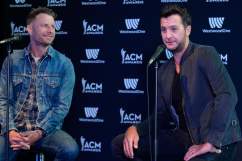 Who Is Hosting the 2017 Academy of Country Music Awards?