You read that right: Jay-Z is being sued for using a logo of his own record label.

As it turns out, the legendary rapper no longer owns the rights to Roc Nation or its affiliated logo, and is now in hot water due to the major league baseball merchandise he’s been selling. According to TMZ, Jay (born Sean Corey Carter) actually sold the logo to Iconix Brand Group for $204 million, and therefore they control over where it appears– not the “N****s In Paris” rapper.

Roc Nation lifestyle specialist Emory Jones spoke on the now problematic partnership, saying that the MLB “are great people to work with in general because I think they get it and it’s no other hat company that creates better. So when you take the quality of it and then have good creative people with it that want to do some new stuff it makes it easier. To me it’s not work.”

Given the large amount of organizations involved, the specific amount of the lawsuit has yet to be determined, but TMZ reports that Iconix will aim to recover at least $10 million, not taking into account additional damages to their brand. 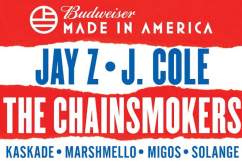 Made In America 2017 Complete & Full Lineup