On tonight’s episode of The Voice, the top 8 contestants are narrowed down to just 4 performers. This means that next week is the two-part finale of season 12. Tune in here as we cover the results as they air live on the show tonight.

After a few words with the judges and the contestants, the first finalist announced as moving forward was Chris Blue from Team Alicia.

Before getting into more results, Big Boi and Adam Levine teamed up for a performance of their new collaboration. Check out their song “Mic Jack” in the below audio video.

After Aliyah Moulden and Vanessa Ferguson were asked by host Carson Daly about their coaches and their time on the show, he continued to announce more artists moving on to the finale. And the second finalist is … Lauren Duski from Blake Shelton’s team.

To break up the show, shots of the contestants were shown talking about the other singers on the show and why they were each so fond of each other. Soon, though, it was again time to hear which contestants were still in the competition. The next contestant revealed as safe was … Aliyah Moulden from Team Blake. Moulden is just 15 years old and began crying out of happiness as she high-fived and hugged the coaches after the announcement.

Next was the reveal of the contestants who will perform for tonight’s last Instant Save of the season. Jesse Larson from Team Adam was the first to be announced and he is Adam Levine’s only remaining artist in the competition. The next artist set to perform for the Instant Save tonight is Hunter Plake. And the third contestant who is able to perform for the Instant Save is … Brennley Brown, who is also from Team Gwen. This meant that Vanessa Ferguson and TSoul are done on the show. Only Brown, Larson and Plake have the opportunity to remain on the show and sing for a spot in the finale.

Brown was the first performer up and for her set, she sang the song “Warrior.”

Brown is just 15 years old and her coach Gwen Stefani couldn’t help but gush about her talent, pleading with viewers to vote for her. Also from Team Gwen, was Hunter Plake, who took the stage to sing the song “Love Runs Out” by OneRepublic. Once Plake performed, Stefani said that he is completely ready and has a mind-blowing vocal capability. She said that Plake is rare, unique and completely deserves to be on the finale. And the last singer up was Jesse Larson, performing the country song “Tennessee Whiskey”, while playing the guitar.

After Larson’s performance, his coach Adam Levine stood up smiling and clapping. Levine said that Larson is a guitar player, who decided to try singing, and said that it was Larson’s wife who pushed for him to be on the show. What amazes Levine is the short amount of time that Larson has has to hone in on his singing skills. In addition, Levine announced that Larson would be the first ever one-chair turn to make it to the finale if viewers voted Larson through with tonight’s Instant Save.

As the voting percentages are shown across the bottom of the television screen, it looks like Jesse Larson is the final contestant to round out the four finalists for the finale. Congrats, Jesse! 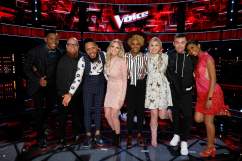