At tonight’s 2017 Tony Awards, host Kevin Spacey opened the show with a medley of musical performances about the Tonys and was even accompanied by back up dancers. At one point, Stephen Colbert appeared and sang with him, giving him advice on being a show host.

When dressing up in several costumes, Spacey got the nod of approval of stars from the audience, including Josh Groban.

Dear Kevin Spacey, today is going to be a good day because you're hosting! #TonyAwards pic.twitter.com/t1OcZnOo8N

Another celebrity then appeared on stage to help with the opening number in “Kevin Spacey’s Nightmare”. Whoopi Goldberg appeared, coming out of a closet, and she decided to give her own advice about hosting as well, followed by the Rockettes and singers dancing across the stage. Mimicking “Groundhog Dog,” Spacey laid in a bed and kept waking up over and over again, stressing over what to do as the Tonys host. Soon a video message from Billy Crystal was shown overhead. Crystal said that the right host can ad-lib, can be funny and he said that he, himself, is actually the right host for the show, unlike Spacey.

Let's all take a moment to appreciate how Kevin Spacey thinks one plays accordion. #TheTonys pic.twitter.com/XDAVdw5nIS

Next, Spacey dressed as Norma Desmond from “Sunset Boulevard,” doing a parody of the song “As If We Never Said Goodbye”.

And, to finish things off, Spacey donned a tuxedo, tap shoes, a cane and several back up tap dancers. The A-lister carried out a classic tap routine and engaged in high-kicks, singing and cane twirling. 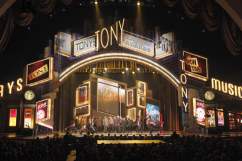