At tonight’s 2017 ESPY Awards, Special Olympics founder Eunice Kennedy Shriver, who passed away in 2009, will receive the Arthur Ashe Courage Award, which is given annually to someone who embodies the spirit of its namesake, Arthur Ashe.

Shriver was a member of the Kennedy family, and her husband, Sargeant Shriver, was the US Ambassador to France under President Lyndon Johnson, as well as the Democratic vice presidential candidate in 1971.

Read on to learn more about Eunice Kennedy Shriver.

1. She Founded a Day Camp in 1963 Which Evolved Into the Special Olympic Games

In June 1963, Shriver and her husband founded Camp Timberlawn– a day camp in Maryland that welcomed 50-60 mentally challenged children and adults each summer. Campers would spend their days swimming, playing baseball, soccer, volleyball, and participating in obstacle courses.

The success of Camp Timerblawn led to its expansion throughout the US, and in 1961, Shriver created the Joseph P. Kennedy Jr Awards in Mental Retardation, which provided grands to more than 80 public and private organizations.

As the Kennedy administration adopted the practice of testing the fitness of American school children, Shriver decided she wanted to administer a similar test to physically challenged children and give them medals as awards for their accomplishments. Eventually, this led to the development of the first Special Olympic Games. 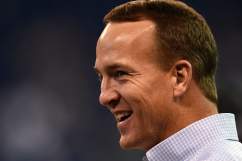 1937: American multi-millionaire Joseph Patrick Kennedy (right), the newly-appointed ambassador to London, with his wife Rose Kennedy (second from right) and eight of their nine children, in London. From left: Edward, Jeanne, Robert, Patricia (1924 – 2006), Eunice, Kathleen, Rosemary and John F Kennedy who later became the 35th President of the United States.

Eunice was one of nine children, born to Rose and Joseph Kennedy in Brookline, Massachusetts. Her brother, John F. Kennedy, became the president of the United States.

Two of her other brothers, Robert F. and Edward M. Kennedy, were US Senators.

In 1984, Shriver was presented the Presidential Medal of Freedom, the nation’s highest civilian honor, from President Ronald Reagan. 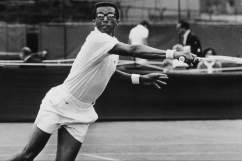 Who Is Arthur Ashe? 5 Fast Facts You Need to Know

3. Her Sister Was Intellectually Disabled

Shriver’s sister, Rosemary, was intellectually disabled. Growing up, Rosemary, the oldest Kennedy daughter, experienced a range of behavioral problems, and struggled with developmental delays as well. At age 11, she was sent to a Pennsylvania boarding school for intellectually challenged students, and from then on, she required the help of private tutors.

In 1941, Rosemary’s father, Joseph Sr., arranged a prefrontal lobotomy that worsened her situation. In The Kennedy’s: An American Drama, Peter Collier and David Horowitz report that the brain operation “made her go from being mildly retarded to very retarded.”

According to a 2015 article in the New York Times, the surgery left Rosemary permanently disabled, and incapable of caring for herself. She was never able to regain full use of one arm, and, according to the outlet, spent the rest of her life walking with a limp.

After the surgery, Rosemary was sent to a private psychiatric institution in New York, where she was never visited by her mother, who, in the words of the New York Times, “couldn’t face her damaged child.” In her biography, “Rosemary: The Hidden Kennedy Daughter,” author Kate Clifford writes, “There is no record of Rose visiting her eldest daughter for more than 20 years.” It wasn’t until the 1960s that Rose visited her daughter and the two reconciled.

4. She Will Be Honored by Michelle Obama With the Arthur Ashe Courage Award at Tonight’s ESPYS

GettyFormer United States first lady Michelle Obama smiles during a conversation at the AIA Conference on Architecture 2017 on April 27, 2017 in Orlando, Florida. Michelle Obama is making one of her first public speeches at the Orlando Conference since leaving the White House.

In a statement, the former First Lady said Shriver’s work to promote inclusion and acceptance was inspiring. Eunice’s son, Timothy Shriver, will accept the award in his mother’s honor this evening.

Eunice Shriver seen playing ball with a mentally handicapped child in Paris 1969. Shriver, founder of the Special Olympics was on a trip to Europe preparing children for the 1970 Special Olympics.

After her death, President Barack Obama described her as “an extraordinary woman who, as much as anyone, taught our nation — and our world — that no physical or mental barrier can restrain the power of the human spirit.”

In 1969, the Eunice Kennedy Shriver Center was founded. The Organization is one of the first mental retardation and developmental research centers in the US. 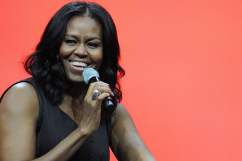