The new trailer for Warner Bros. Pictures’ Justice League was unveiled at the San Diego Comic Con, highlighting the threat Batman and Wonder Woman face in the new film. It’s a long sneak peek too, lasting over four minutes.

You can’t save the world alone. The cast of #JusticeLeague unites in Hall H TODAY. #WBSDCC pic.twitter.com/ATXtFZ95xO

That impending doom comes courtesy of Steppenwolf (Ciaran Hinds). He is a character out of the mind of comic book genius Jack Kriby, who introduced him as part of his Fourth World books. Steppenwolf is the uncle of the evil Darkseid, the lord of Apokolips. In the DC Extended Universe, Steppenwolf comes to Earth with a horde of Parademons to recover the three Mother Boxes. One is held by the Atlanteans, another by the Amazons. The one held by Mankind is inside Cyborg, who needs it to stay alive.

What’s a Mother Box? It’s a computer used by the New Gods to create a Boom Tube, a passageway from their world of New Genesis to Earth.

Justice League was directed by Batman v Superman and Man of Steel helmer Zack Snyder, although he had to let The Avengers director Joss Whedon oversee reshoots after a personal tragedy. Snyder wrote the screenplay with Chris Terrio, the Oscar-winning writer behind Ben Affleck’s Argo and a contributor to the Batman v Superman script. 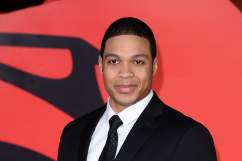