Ernest Cline’s modern classic Ready Player One is now a film thanks to director Steven Spielberg. Warner Bros. showed off the first teaser trailer for the film at San Diego Comic Con, ahead of the film’s March 30, 2018 release date.

In Ready Player One, X-Men: Apocalypse actor Tye Sheridan stars as Wade Watts, an unlikely hero who joins the contest set up by James Halliday (Bridge of Spies Oscar-winner Mark Rylance). The film is set in 2045, where Halliday has created the OASIS, a massive virtual reality network. In his will, Halliday bequeathed his huge fortune to whoever can find a specific Easter egg inside his digital world. When he dies, the entire world competes for the prize, and Wade hopes to win.

Cline’s novel is well known for including dozens of references to 1980s movies, including some of Spielberg’s own films. In an interview with Entertainment Weekly in 2015, Spielberg said he’s cut those references.

“They reference so many ’80s movies. I’m doing the whole pop culture thing. I’m just going to leave myself out of it,” he told the magazine. “I can’t do that. Too self-referential.”

The trailer does include a shot of The Iron Giant from Brad Bird’s cult animated movie, but that’s a ’90s film!

The Iron Giant is a major player in #ReadyPlayerOne

But it wasn’t the references that attracted him to Cline’s story. “I’m telling this story because I really feel what’s in Ready Player One is going to be in our lives before we know it,” he said of the future depicted in the novel.

While Spielberg won’t be referencing his own films, the movie will have a score by Alan Silvestri, who wrote the score to another iconic ’80s movie, Back to the Future. Silvestri is replacing John Williams, who typically writes the scores for Spielberg’s films. The film does reunite Spielberg with cinematographer Janusz Kaminski, who won Oscars for filming Schindler’s List and Saving Private Ryan. All but one of Kaminski’s Oscar nominations are for Spielberg films, including Lincoln and War Horse. (The only non-Spielberg film Kaminski earned an Oscar nod for is The Diving Bell and the Butterfly.)

Here’s the full cast of Ready Player One: 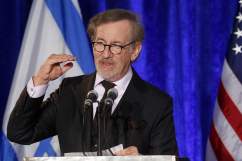 Steven Spielberg’s Net Worth: 5 Fast Facts You Need To Know