Just two years ago, Star Wars: The Force Awakens director J.J. Abrams took San Diego Comic Con fans to a surprise performance of Star Wars music. Since then, arguably the biggest science fiction franchise of all time has been noticeably absent from the most important pop culture convention in the country. That will continue this year, so do not expect a new trailer for Star Wars: The Last Jedi. However, there will still be some events for Star Wars fans at SDCC 2017.

Since Disney has started hosting its own conventions to highlight its intellectual property, the studio has mostly stayed away from SDCC, save for Marvel projects. Just last week, the studio had its D23 convention in Anaheim, which celebrated all things Disney. There was a Star Wars event there, and that saw the release of a behind-the-scenes Last Jedi reel, seen below.

SDCC is also four months after Star Wars Celebration in Orlando. During that convention in April, the studio released the teaser trailer for The Last Jedi. The film opens on December 15, so we’ll probably see another trailer before then.

Like last year, when Disney didn’t show up to push Rogue One: A Star Wars Story, there are still some Star Wars-related panels for books and collectibles that fans will enjoy. Plus, you’ll see plenty of cosplayers dressed as Stormtroopers, Darth Vader and Boba Fett to take pictures with. Also, Hasbro has plenty of exclusives to pick up.

Here’s a look at the schedule of Star Wars panels, via comic-con.org. All times PDT. The events are being held at the San Diego Convention Center, unless noted otherwise.

The 501st Legion: An Introduction to Villainous Costuming in the Star Wars Universe – 8:00 p.m.: A group of panelists explain how to create your own villain costumes at home and how you can join the 501st Legion. This event is being held at the Grand 1 & 2, Marriott Marquis San Diego Marina.

I’ll Take Quidditch for $500, Obi-Wan: Fan Game Show – 8:00 p.m.: This isn’t specifically Star Wars, but there will be plenty of questions abut the franchise during this fun trivia game.

Steampunk Invades A Galaxy Far, Far Away – 11:00 a.m.: This is a fun panel for cosplayers looking to change up their outfits by adding Steampunk to Star Wars.

Hasbro: Star Wars – 1:00 p.m.: Looking for your chance to complain to Hasbro directly about how hard it is to find new figures? Now’s your chance! There will also be some surprises and new product announcements.

The Science of Star Wars – 2:00 p.m.: Just because Star Wars isn’t real, doesn’t mean there is no way to bring its technology to life. Experts discuss how we could see Hyperspace become a reality… maybe.

Judges on Star Wars – 3:00 p.m.: This is a panel of six judges and two attorneys who talk about the legal ramifications of the decisions Star Wars characters make in fictional movies. California Supreme Court Justice Mariano-Florentino Cuéllar has some free time to join.

Star Wars and Fandom: The Early Years – 4:00 p.m.: Since 2017 marks the 40th anniversary of Star Wars, this will be a fascinating panel on what it was like to be a fan of the franchise during its early days.

Star Wars Music and Sound – 5:00 p.m.: This is another 40th anniversary-related panel, where musicians and sound techs who worked on all the movies discuss their experiences.

Basic Star Wars Robotics A La Mouse Droid – 6:00 p.m.: If you want to know how droids work, this is the panel to check out.

Ladies of the Legions, A Women’s Guide to Star Wars Costuming – 4:00 p.m.: This panel includes members of various Star Wars cosplayer clubs going over making your own costume of female characters from the universe. This takes place at the Grand 1 & 2, Marriott Marquis San Diego Marina.

Princess Leia Star Wars Fan Club Tribute Presentation – 10:00 a.m.: Start the last day of the convention with a tribute to Carrie Fisher. Unlike other tributes, this one features stories from fans who have met Fisher over the years. 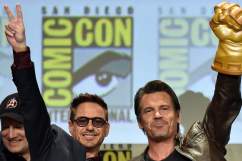 #sdcc exclusive Luke Skywalker Landspeeder with Luke will be available to purchase on HTS on 8/14 https://t.co/thAiZV2UlM pic.twitter.com/K91XHg3TwO

After Friday, you can spend the rest of your convention standing in line, trying to get all the Star Wars exclusives. Many of them are listed at StarWars.com.

However, there are three big 6″ Black Series exclusives from Hasbro. Ahead of the convention, the company officially revealed the Rey & Luke Skywalker Last Jedi two pack. It’s likely that these will be available later on in stores individually, so the fancy packaging is the main exclusive.

The other two exclusives were announced in April. First, there’s a Grand Admiral Thrawn figure, packed in a box that includes all the artifacts from his office. The regular retail version will only come with a blaster.

The other exclusive is Luke Skywalker with his X-34 Landspeeder from A New Hope. The regular retail version won’t include the poncho and rifle, and costs $30 less.