Hallmark’s new Christmas in July movie, The Christmas Cure, premieres tonight at 9 p.m. Eastern. If any of the cast look familiar to you, there’s probably a good reason. Learn all about the cast of the movie below.

Nevin plays the leading role of Vanessa, an emergency room doctor, in The Christmas Cure. She frequently stars in Hallmark movies, such as On the Twelfth Day of Christmas and Journey Back to Christmas. You may also recognize her from Chicago Fire, where she played Tara, from Scorpion where she played Linda, and from Breakout Kings where she played Julianne. She also starred as D.B. Russell’s daughter in a recent arc on CSI.

She began her career as a teen star of Animorphs. She also does improv and sketch, and starred in the movie Archie’s Final Project.

Patrick Duffy plays Bruce, Vanessa’s father. He has a long range of credits to his name. He’s starred in Man from Atlantis, Dallas, Step by Step, and many other shows. His series Man from Atlantis was the first American TV series to be aired in China. He also starred in The Bold and the Beautiful. In his spare time, he writes a sci-fi series called “Man From Atlantis.”

Kathleen Laskey plays Martha on The Christmas Cure. A few years ago, she starred on another Christmas TV movie for Hallmark: One Starry Christmas. She’s also appeared on Hank and Mike, Our Fathers, New York Minute, Mail to the Chief, When Innocence Is Lost, The Legend of Gator Face, Hostage for a Day, Getting Gotty, Amy Fisher: My Story, Love & Murder, and many more.

Additional cast members include Jocelyn Hudon as Shelly and Dale Whibley as Kyle.

Emergency room doctor Vanessa returns home for Christmas to find that her father, Bruce has decided to retire and close down the family medical practice. Vanessa spends her Christmas trip working at her fathers clinic and reuniting with her high school sweetheart, Mitch. The emotional Christmas visit helps Vanessa realize the personal connections and family memories she has been missing. As Christmas approaches, Vanessa must decide whether to return to a waiting promotion in Los Angeles or continue her fathers family practice and pursue a relationship with Mitch in her hometown.

Lewis Chesler and David Perlmutter are the executive producers. Marek Posival is the producer. And John Bradshaw directed the movie, which was written by Marcy Holland. 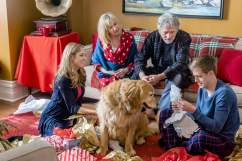 When Do Hallmark’s Countdown to Christmas Movies Begin in 2017?