British actor Tom Holland plays the quintessentially American hero Spider-Man in Marvel and Sony’s Spider-Man: Homecoming. Holland comes from a family of creatives, as his father is the comedian Dominic Holland and his mother is photographer Nicola “Nikki” Elizabeth Frost. He also has three younger brothers, Sam, Harry and Patrick.

The 21-year-old Holland was born in Kinsington upon Thames, London and attended The BRIT School for Performing Arts and Technology. He first gained fame on the stage, starring in Billy Elliot The Musical in 2008 through 2010. This led to roles in the films The Impossible, How I Live Now, Locke and Ron Howard’s In The Heart of the Sea.

In 2015, Holland was cast to play Spider-Man/Peter Parker, making his debut as the character in 2016’s Captain America: Civil War. In 2017, he also starred in The Lost City of Z.

Here’s what you need to know about Holland’s family.

At zizzis in the market place. Love where we live.

A post shared by Nikki Holland Photography (@nikkihollandphotography) on Nov 26, 2016 at 10:10am PST

Harry has shown more interest in following his older brother into acting. He has also appeared in 2013’s Diana with Naomi Watts and has been in a couple of shorts. He also directed three short films himself.

2. Younger Brother Patrick Says He’s Also Gone on Auditions, ‘But I Never Get Them’

Been swinging around for years. @tomholland2013 #spidermanhomecoming

A post shared by Nikki Holland Photography (@nikkihollandphotography) on Jun 1, 2017 at 5:49am PDT

Holland took most of his family with him to the Hollywood premiere of Spider-Man: Homecoming on June 28. Sam was his only brother to miss out on the event and his father couldn’t make it. His grandparents, Tony and Tess, his grandma Tina and cousin Sydney all attended.

Brother Patrick “PAddy” Holland, who is 13, told Entertainment Tonight that he’s really trying to be like his older brother. He just doesn’t have the same luck as Tom. “I try I do a lot of auditions, but I never get them,” Patrick said.

Holland suggested to ET that Patrick could play a young Peter Parker, but Patrick would rather play Spidey’s “long lost brother.”

3. Holland’s Paternal Grandmother Was Born in Tipperary, Ireland & Says Dublin Is 1 of His Favorite Cities

Holland’s father, comedian Dominic Holland, is the son of Teresa Quigley and John Charles Anthony Holland. Teresa is a teacher who was born in Tipperary, Ireland. In an interview with RTE, Holland said he has embraced his Irish roots.

“My granny is from Tipperary,” he told the Irish network. “She’s got so many brothers and sisters. I’ve got a huge family back in Ireland, and I’ve made loads of movies in Ireland.”

Holland said he recently filmed Pilgrimage with Jon Bernthal, which required him to learn Gaelic.

“Dublin is one of my favourite cities. It’s an absolutely amazing place,” Holland told RTE.

In a 2012 Moaning News profile, Dominic Holland, whose father is from the Isle of Man, said his parents live in Ealing and have been a major part in his children’s lives. Dominic Holland also has brothers and sisters.

The Brothers Trust launches in London 23rd July – it's going to be awesome and you can support us and even be there…Link in Bio pic.twitter.com/K2RZpQqHS3

In June 2017, Holland launched The Brothers Trust with his brothers. “I am very much enlisting my family in this venture and we have big plans ahead for some awesome events and opportunities,” Holland wrote in a statement on the site.

The trust hosts events, with proceeds going to the family’s favorite charities. The list f charities includes The Lunchbowl Network, which helps feed children in Kenya; Momentum, which helps Kinsington Hospital, where the Holland brothers were born; and DEBRA, a charity that helps patients and families affected by Epidermolysis Bullosa.

Holland’s mother, Nikki Holland, has a link to the trust in her Instagram bio.

“Possibly and hopefully the most important thing that tom accomplishes – watch this space,” Holland’s father wrote. 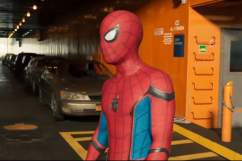 5. Holland’s Dad Wrote a Whole eBook About How He Beat His Father to Stardom

Dominic Holland (right) with Ronnie Wood of the Rolling Stones.

Holland is only 21, but he’s already earned more fame than his 50-year-old father Dominic. And Dominic is the first one to tell everyone that. In fact, after The Impossible came out, he published an eBook called How Tom Holland Eclipsed His Dad.

In an excerpt published by the Daily Mail, Dominic admitted that he’s spent over 20 years trying to make it in Hollywood. His son made it before he reached 20 years old.

“I have been trying to make it as a star for a long time. For more than 20 years, my entire income has come from making people laugh — or trying to. I am a professional comedian, a published novelist and a general wit for hire. Many of my routines are inspired by my four sons Tom, 16, twins Sam and Harry, 13, and Paddy, eight,” Dominic wrote. “But I am the first to admit that I have never been a household name.”

Dominic has been an acclaimed stand-up comedian in the U.K. since the early 1990s, and wrote several scripts for television shows, but he’s never found success in Hollywood.

“So, looking at my son, Tom, standing next to me in the immigration queue at the airport in Los Angeles, I realised that, at the tender age of 16, he had already eclipsed his father’s own showbusiness career,” Dominic wrote in 2013. 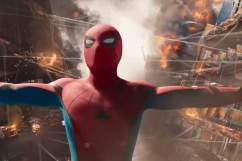