Four years after the release of their last album, Thirty Seconds to Mars is back and they used the 2017 MTV Video Music Awards to announce their return. The trio, led by Oscar winner Jared Leto, walked the red carpet on the way to The Forum in Inglewood, California. The group performed their new single, “Walk on Water,” live for the first time.

Photos of their performance will be included later.

Since it’s been awhile for the group, which is also made up of Leto’s older brother Shannon and multi-instrumentalist Tomo Miličević, it’s no surprise that they aren’t nominated for any awards this year. However, they do have a past with the show. In 2006, they won the fan-voted MTV2 Award for “The Kill.” They also won the Best Rock Video award for “Kings and Queens” in 2010 and “Up In The Air” in 2013. In 2007, the group won the Modern Rock Artist Award at the Billboard Music Awards.

“Walk on Water” is the first new song for 30 Seconds to Mars since Love, Lust, Faith and Dreams. In the interim, Leto has become a major Hollywood star, winning Best Supporting Actor for Dallas Buyers Club and playing The Joke in Suicide Squad. He also stars in the upcoming Blade Runner 2049 with Harrison Ford and Ryan Gosling.

“‘Walk on Water’ is a song about change,” Leto told Entertainment Tonight recently. “It’s a song about freedom, it’s an optimistic song. It’s a hopeful song, it’s a song that speaks to the times that we’re living in.”

In an interview with MTV News, Leto said it took him three years to finish writing the song. “People are responding really positively, so that’s nice,” Leto said.

After the VMAs, the group will hit the road for a short September tour. They will also perform at the iHeartRadio Music Festival in Las Vegas on September 22 and at Rock In Rio on September 24. 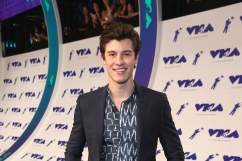