Photo by Paul Sakuma-Pool/Getty ImagesAttorney Gloria Allred leaves the courtroom with her client Amber Frey after Frey was questioned by attorney Mark Geragos during the Scott Peterson trial August 24, 2004 in Redwood City, California. Peterson was charged and convicted for the murder of his wife, Laci, and their unborn child, Conner.

On tonight’s episode of The Murder of Laci Peterson, which is based on the true events of Laci Peterson’s death and her husband’s conviction, viewers meet Scott Peterson’s mistress Amber Frey. Peterson reported his pregnant wife as missing on December 24, 2002 and soon, reports of his cheating became public, according to FOX News. And, according to a relative of Peterson, his wife knew of his affairs.

Amber Frey, who was a 28-year-old single mother and massage therapist at the time, came forward after Peterson was arrested for the murder of his wife and unborn child. Frey ended up helping authorities try to build a case against Scott Peterson, her lover. Frey said she did not know Peterson was married when they were dating.

Frey actually ended up testifying in the trial against Scott Peterson and she told the Today Show in 2015 that she does not regret her actions. She explained:

I don’t regret anything. As crazy as it sounds as what came out and whatnot, I would do it all over again because it wasn’t about me. There was a missing woman carrying a child that if I had something that would help, without question (I would).

Scott Peterson was found guilty of murdering his wife Laci in 2003. And, when he was arrested, Daily Mail reports Peterson was found in his car with a whole new look, carrying knives, in possession of a shovel and with directions to Amber Frey’s workplace. Some could speculate that Frey could have potentially “been his next victim”.

Photo by Tony Avelar-Pool/ Getty ImagesAmber Frey leaves a San Mateo County courtroom after she was questioned by attorney Mark Geragos during the Scott Peterson trial at the San Mateo County Court House August 23, 2004 in Redwood City, California. Peterson was on trial for the murder of his wife, Laci, and their unborn child, Conner.

Most recently, Amber Frey still works as a massage therapist and sometimes does missionary work for her church, according to the Daily Mail. 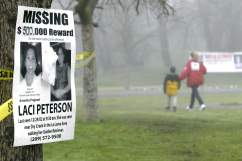 Read More
TV
On The Murder of Laci Peterson tonight, viewers get a closer look at Scott Peterson's mistress. Who was his girlfriend Amber Frey?