Colin Cloud is a mentalist contestant on America’s Got Talent and he says that he uses criminal profiling to carry out many of his tricks. But, apparently, there are some easy ways to execute his tricks without having psychic abilities, according to a site called Secrets Explained.

In the above audition video, Cloud conducts an elaborate trick, involving the judges. First, he correctly guesses the professions of a couple people sitting in the front row and then he asks host Tyra Banks to sit on a box that is on stage. Afterwards, he performs a coin trick, guessing which hand the coin is in when judge Howie Mandel participates. He also does the same with judge Mel B and so on. During this, he asks the audience for their input, asking them to pick a color, a name and an animal. The words that are chosen are white, Oscar and a cat. At the end of the trick, Cloud revealed that all three words were in the box Tyra Banks had been sitting on throughout the trick. But, how did he do it?

Of course, the people in the front row were probably planted there by Cloud or, Secrets Revealed said that Cloud may have had access to the identities of people in the audience. Identifying which hand is holding a coin is probably used with a metal detector that Cloud may have hidden in his sleeves. And, when it comes to the words that the audience chose, it was actually Cloud who did the picking. They shouted out words and he picked the ones he needed for his trick. Tada! Secrets Revealed gets into all the details about how he did the trick, in addition to exposing the tricks of other magicians.

Reveal Magic TV also has their own take on how Cloud performed the trick. Check it out in the below video. 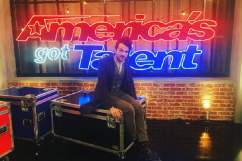