Earlier in the season on Bachelor in Paradise 2017, contestant Lacey Mark had a rough time finding a man who was romantically interested in her. She even cried to the cameras that all she wanted was for former cast member Daniel Maguire to show up and romance her. For her, she said that Maguire was the total package.

Well, apparently Mark gets her wish as Maguire shows up on tonight’s episode in time for the rose ceremony.

Prior to the season airing, there was promo footage that aired, showing Maguire in bed with Mark and talking about the advantages of sex tapes. So, do you think Maguire’s intentions with Mark are long-term? Reality Steve reports that the two are no longer dating … or at least he hasn’t heard anything about them continuing with a relationship after the show.

Recently, Maguire appeared on the premiere episode of this season’s Million Dollar Matchmaker. Clearly, they were unsuccessful in finding love on the show.

As for Lacey Mark, don’t feel too sorry for her in the love department, as Life & Style reports that she actually dumped a boyfriend in order to be on Bachelor in Paradise this season. His name is reported as Jackson Harris.

At the very beginning of the season, prior to the break in filming due to the allegations of sexual misconduct between Corinne Olympios and DeMario Jackson, Lacey Mark seemed to be hitting it off with Iggy Rodriguez. But, their time was cut short when Mark got news that her grandfather had passed away. In turn, she decided to leave the show.

Thank you all so much for your messages of love and condolences. Y'all have made my grandpa proud ? pic.twitter.com/GF07WGBcIG

Everyone who’s close to me knows how much my family and I adored my grandfather. He was literally the most interesting man in the world. I’m lucky to have the best friends and family in the world. RIP Captain Bernard P. Mark.

Fortunately for Mark, she was able to return to film when production picked back up again. 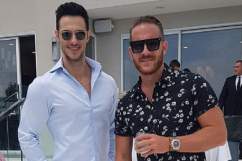