Long hair was a vibe… btw who's tuning in Sunday @lifeofkylieone ??

Kylie Jenner has been friends with her BFF Jordyn Woods for years and fans have seen her make appearances on Keeping Up With the Kardashians. They’ve also seen many photos of Woods on Jenner’s Instagram page. And now, Woods is a co-star on Jenner’s new reality show Life of Kylie. Get to know more about Woods, her family tragedy, her life as Kylie Jenner’s best friend, and her other famous ties in Hollywood in our 5 Fast Facts below.

1. Woods’ Mother Elizabeth Is Her Momager

Jordyn Woods’ mother Elizabeth works as a talent manager, brand manager and photographer, who Bustle describes as a socialite. Elizabeth Woods works for Mixed Image Media and Woods Marketing Group. On her LinkedIn profile, Elizabeth Woods’ description of herself reads: 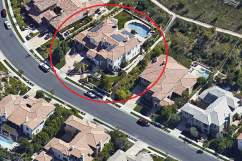 Kylie Jenner’s House on ‘Keeping Up With the Kardashians’

2. Her Father Died of Cancer This Year

Last night heaven Got Another angel. My Daddy. Just two short weeks ago he was diagnosed with cancer and by that time it was too late. I appreciate everyone's kind words and it means the world to me. It still doesn't feel real. Forever and Always ?❤️

On January 19, 2017, Jordyn Woods’ father, John, passed away from cancer and Woods revealed the sad news via Instagram, writing:

Last night heaven Got Another angel. My Daddy. Just two short weeks ago he was diagnosed with cancer and by that time it was too late. I appreciate everyone’s kind words and it means the world to me. It still doesn’t feel real. Forever and Always.

Tonight my best friend of so many years rode off into the sunset on a forever long Harley ride. Thank you for being a great husband , best friend and thank you for our fabulous kids and I’m so numb that I can’t even believe this is real. RIP my angel John. #teamigotthis #family #love #mobbinforlife #f–kcancer.

After Woods’ dad’s death, a GoFundMe page was started by Mom Elizabeth and Woods’ BFF Kylie Jenner donated $10,000 to help with medical and memorial costs. The goal for the page was $50,000, but they were able to raise just over $18,000. On the page, Elizabeth Woods described her husband’s illness and how it affected the family, saying that:

He was admitted to Los Robles ICU on December 17th suffering from Flu-like symptoms. John was diagnosed with Meningitis and remained in ICU for three weeks … Dr.’s noticed a lesion in John’s nose that caused some concern. The lesion was biopsied and it was found to be mold. After continuous high doses of antibiotics, there was still no marked improvement. John was alert intermittently but unable to communicate well. A liver biopsy revealed our worst fears, of stage 4 … Adenocarcinoma which also metastasized to his pancreas, liver and brain. There is no life experience or script that prepares you to tell your kids that their Dad has terminal cancer and not long to live … John was released from the hospital after Doctors decided there was nothing else that could be done and began hospice care at our home on Tuesday, January 17th. Much to our shock and disbelief, our beloved John Woods succumbed to his short aggressive battle with cancer two days later.

In addition to donating money to the Woods family, Jenner showed her love via social media, writing on Instagram at the time that:

My Fire Ox, My Brother, My Soul Sister. Give Jordy & her family some support and prayers right now. I love you the long way @jordynwoods. The other half of me .. When you cry I cry.

3. Woods Has Worked as a Model

Behind the scenes from today… So happy to be on this journey in New York building my portfolio. Embrace who you are and never let anyone tell you can't do something <3 #wilhelminaCurve

Woods has been signed to the modeling agency Wilhemina International Curve, in a division of plus-size models. In an interview with Teen Vogue, Woods talked about her modeling goals, explaining:

I’ve always known that my purpose is to help as many people as possible, and with modeling I feel like it’s an awesome way to show girls you don’t have to look any particular way. You just have to be confident and own exactly who you are because one of the greatest things we’re given is our individuality — not one person is exactly you. I want to show everyone that you can do what you want, don’t be afraid to try new things.

Woods also talked about being considered plus-size and said:

For me, it’s awesome because I’m just naturally a super curvy girl and I feel like my body will never be size 0. There’s so many people out there just like me, and right now the curve industry is just blowing up because people are realizing curve models are cool, and most people are not that skinny. I just want to make a change in the curve industry because I want other curve girls to realize that you don’t have to dress a certain way because you are curvy. There’s not a lot of clothes out there for girls that are bigger, there’s not a lot of trendy things out there, and I want to change the way people look at the plus size industry.

When speaking with NY Mag, Woods revealed that she was actually discovered for modeling via Instagram. In addition to her own excitement, Woods has said that she has had a lot of support from her fans, friends and family in her modeling.

4. Jaden Smith Is a Life-Long Friend of Woods’

Jordyn Is One Of The First People I Ever Met, We've Been Friends Since A Few Days After I Was Born And Always Will Be||| Lexington Lives Through The Spirit Of Sherman Way. Remember This

According to Jaden Smith, he and Jordyn Woods have been friends since he was just a few days old. So, clearly, Woods is a friend of the Smith family (Will & Jaden Pinkett-Smith). Woods even calls Will Smith her “uncle.” In addition to Woods being longtime friends of the Smiths, the Kardashian-Jenner family has also appeared to be close with them as well over the years.

5. Kylie Jenner’s Lifestyle Can Be Draining on Woods

In an interview with The Cut, Woods talked about what it’s like to have a very famous BFF like Kylie Jenner and she said:

It’s become so normal for me that I don’t realize how different it is. It’s something where, if you’re going out you have to be conscious that there may be five grown men following behind you in a car. Or if you want to just wake up and leave the house, to be aware that there will be photos taken, people watching, and anywhere you go, everyone will be staring … For most people, that’s not normal. But because it’s just become a lifestyle for me, I can only try to make her as normal as possible.

Though Jenner’s lifestyle seems to have become a norm for friend Woods, Woods has admitted on Jenner’s new reality show Life of Kylie, that being her friend can be quite draining.

Read More
Kylie Jenner, Reality TV, TV
Get to know more about Kylie Jenner's best friend Jordyn Woods, her parents, their friendship and who Woods is apart from Jenner.