#KimKardashian apologizes for defending #JeffreeStar's racist past. She didn't know enough about the situation to tell fans to get over it. pic.twitter.com/T0lRAuNZ8E

Kim Kardashian took to Snapchat on Tuesday to apologize to her fans — and to anyone who may have been offended — for defending beauty influencer, Jeffree Star.

On Monday night, Kardashian posted a series of videos on Snapchat, showing swatches of her new makeup products. She will release her new Bronzing Contour and Highlight Palette later this month. In an effort to show fans the different shades and textures, Kardashian used her arm as a display.

Star took to Twitter to share his feelings on the new products, saying that they looked like “chalk.” Kardashian’s fans weren’t too happy about the negative feedback and Twitter lit up with comments. Star stuck by his words, however, and said that he’d really have to try the products before giving an official review.

Kardashian responded to that chatter on social media and admitted that her swatches weren’t great. She then brought up racist comments that Star made over a decade ago — and that’s what caused a major Twitter storm.

“I see [my fans] being so petty bringing up things from his past where he, you know, was negative, but he’s also apologized for those things. And I get it’s a serious deal if you say racial things, but I do believe in people changing, and people that apologize, I will give them the benefit of the doubt. I know better than anyone that I hate when people bring up my past or mistakes I’ve made in the past. So let him live. I want to make one last thing clear, I do not defend people that are racist and I am very against it. But if someone claims that they have changed, I would love to give them the benefit of the doubt, and I pray to God that they do change for the sake of my children and my friends,” Kardashian said.

Hours later, Kardashian posted the above video on Snapchat. 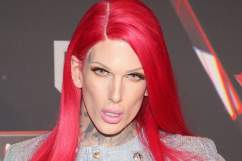