In Rick and Morty Season 3 Episode 3, one term was used over and over: “Solenya.” This was the term used to refer to Pickle Rick. What does it mean? And is it used outside of the show? Some fans are wondering, so we’ve put together this handy guide to help you.

Although the term is indeed real, Solenya itself isn’t a real Russian myth. There’s no Pickle Man. :( Most fans probably already knew that, but wouldn’t it be hilarious if it had been? A Pickle Man who comes after you because you threw away half of your sandwich. That would be GRAND. OK, maybe it would be scary in real life. But the concept is hilarious.

A quick Google search reveals that Solenya does, indeed, mean “pickles” in Russian.

A commenter below noted that another possible connection to solenya is “solenye.” This is Russian for “pickled with a salt,” commenter khrundel noted below. If you google “Solenye,” you’ll see quite a few recipes and listings for salted and pickled cucumbers. Another commenter noted that Soljenka is a Russian spicy soup, and sounds similar.

Of course, this search required a deeper dive into “pickles” and their Russian connection — because what Rick and Morty story shouldn’t involve a random Internet rabbit hole?

Unfortunately, not much turned up. There’s unique Christmas Pickle tradition, but it’s not from Russia. (And yes, Christmas Pickles are a thing. It’s a tradition where a pickle-shaped Christmas decoration is hidden on a tree, and the person who finds it gets a reward or “good fortune.” It’s commonly believed to be from Germany, but it actually may have started as a marketing campaign in the U.S. in the 1800s.)

Apparently in Russia and Poland, however, people cure hangovers by drinking pickle juice. That was interesting.

But no, there’s no “Pickle Man” myth and no deep connection with Solenya and Russia aside from it merely meaning “Pickles.” As commenters below noted, the reverence they showed for the “pickle man” could be a reference to a couple movies, such as John Wick‘s the Boogeyman or Keyser Soze in Usual Suspects.

Here’s an explanation of Pickle Man from the show:

Maybe we should take Rick and Morty‘s own advice on this one:

Stop digging for hidden layers and just be impressed. 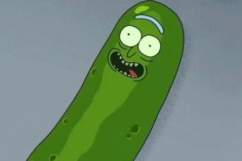 Read More
Adult Swim, Rick and Morty, TV
What does Solenya mean on Pickle Rick? Is it a real myth?