Facebook/GloriaAllredPressConference Appearing in a press conference with attorney Gloria Allred (L) by her side, Robin M. (R) has said that the was sexually victimized by Roman Polanski in 1973.

A woman identifying herself only as Robin M. has come forward with sexual abuse allegations against famed director Roman Polanski.

Appearing in a press conference with attorney Gloria Allred in Los Angeles on Tuesday afternoon, Robin said that the was “sexually victimized” by the Chinatown director in 1973.

Read on to find out what we know about Robin:

1. She Was 16 at the Time of the Alleged Incident

Robin claims she was 16 years old when Polanski “sexually victimized” her.

Attorney Gloria Allred would not comment when asked if the incident occurred on– or in any way was related to– a film set or production.

2. She Says She Considered Speaking out to Support Samantha Geimer in the 1970s

During the press conference on Tuesday, Robin said that she considered stepping forward with her story to support Samantha Geimer in the 1970s.

In 1977, Polanski, now 83, was arrested and charged with five offenses against Geimer, who was just 13 at the time. He plead guilty and spent 42 days in jail. Polanski then fled to France in 1978– just hours before his sentencing. Since then, he has never re-entered the country and lives abroad as a fugitive.

In 2010, an actress named Charlotte Lewis also stepped forward claiming that Polanski sexually abused her in the 1980s, when she was just 16. She said the incident occurred on the set of the film Pirates. Lewis was also represented at the time by Gloria Allred, but did not file legal charges.

3. Robin and Allred Want Polanski to Return to California to Be Sentenced

Samantha Geimer has, in the past, lobbied for Polanski to be tried in absentia. On Monday, Allred said that she and Robin do not believe this would suffice. “While we understand that Ms. Geimer would like this case to end, Robin and I feel that it is very important that Mr. Polanski returns to court in California to be sentenced… Any other defendant who is not rich and famous would be required to be present for a sentencing proceeding on a conviction for a felony committed against a child.”

Allred continued by saying that no exception should be made in the court system for a Hollywood film director.

“If he does decide to go to trial, Robin is willing to testify under oath, regarding her allegations against Mr. Polanski. Other accusers may be called as well.”

4. She Says She Did Not Want to Speak to Police Because She Was Nervous About Her Father’s Reaction

Director Roman Polanski attends the “Based On A True Story” screening during the 70th annual Cannes Film Festival at Palais des Festivals on May 27, 2017 in Cannes, France.

During the press conference, Robin revealed that she did not immediately go to the authorities after the incident out of fear of how her father would react. “The reason that I kept it to myself is because I didn’t want my father to do something that might cause him to go to prison for the rest of his life,” she said during a press conference Tuesday.

5. She Said That Geimer’s Recent Statements Incited Her to Speak out

GettySamantha Geimer appears in court at the Clara Shortridge Foltz Criminal Justice Center on June 9, 2017 in Los Angeles, California. Geimer was assaulted by Director Roman Polanski in Los Angeles in 1977 when she was age 13.

Recently, Geimer said that she wanted the criminal case to end so that she and her family can move on.

Today, Robin said this angered her. In the press conference, Robin said: “This infuriated me. I am speaking out now so that Samantha and the world will know that she is not the only minor Roman Polanski victimized.”

Nearing the end of the press conference, Allred said: “Given what is pending in this case, I think this is not the time for her to discuss what she alleged. But she certainly did the right thing in speaking to law enforcement– I admire her for that.” 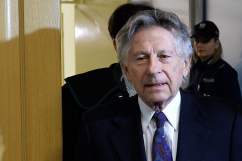 Read More
Roman Polanski
A woman identifying herself only as Robin M. has come forward saying that Roman Polanski sexually victimized her when she was 16.